When I think about what to post next on my social media, I always have an internal argument with myself, it set me thinking about when I’m looking through my image library for new images to post, it’s always the ‘big’(lions, elephants, puffins, the things that get the most engagement), the ‘small’ (the birds – which don’t do so well on likes etc.) or the fascinating (strange behaviours, cute moments etc.) not the everyday, not the Impala, not the Kudu. So I decided to write a whole blog about the common Antelope, the overlooked, the underappreciated, the mainstay of a safari, the humble and beautiful Antelope.

I was going to put them in size order, turns out I don’t know the size order – I know some of them but then there’s a few outliers that I’m not sure of, so I’m going randomly go through them.

These are the ones I actually have photos of, there are more, obviously, and these photos are taken from the entire 10+ years of my image library so some of them aren’t the standard I hold myself to now because I took them 10 years ago.

We will start with the Impala, the most common of all antelope, I’ve had a safari guide tell me, they would pay for my next trip if we didn’t see an Impala on a drive! We saw them! Although one morning in Kruger, we didn’t see an animal for hours – not even an impala and we were severely worried that someone had stolen all the animals. 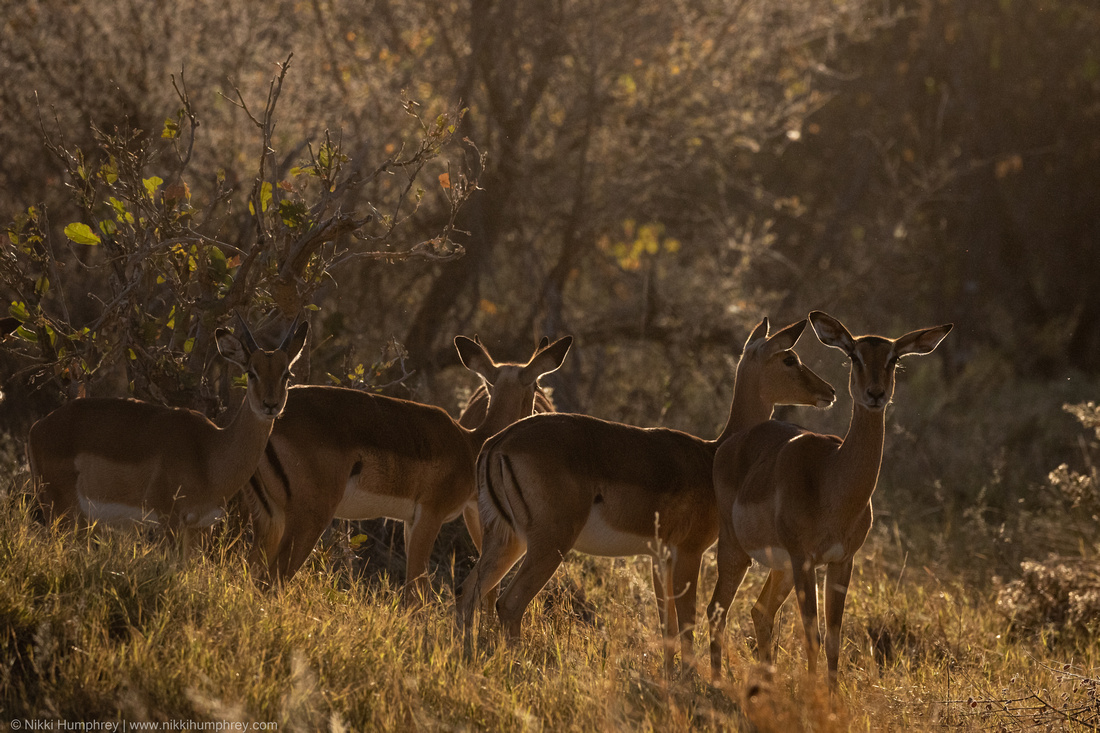 The Impala is so numerous because it is a prey animal, the amount of prey must outweigh the predators or the whole ecosystem comes crashing down, and a lot of predators like Impala, from Wild Dog to Leopard, Baboons to Pythons, they are eaten by almost everything that eats meat.

You see them so often you forget to stop and look at them sometimes but as with many of the antelopes, they are quietly beautiful and interesting. The amount of lambs born is more than the predators can take so a large proportion will survive and therefore the survival of the species is guaranteed. Clever prey. 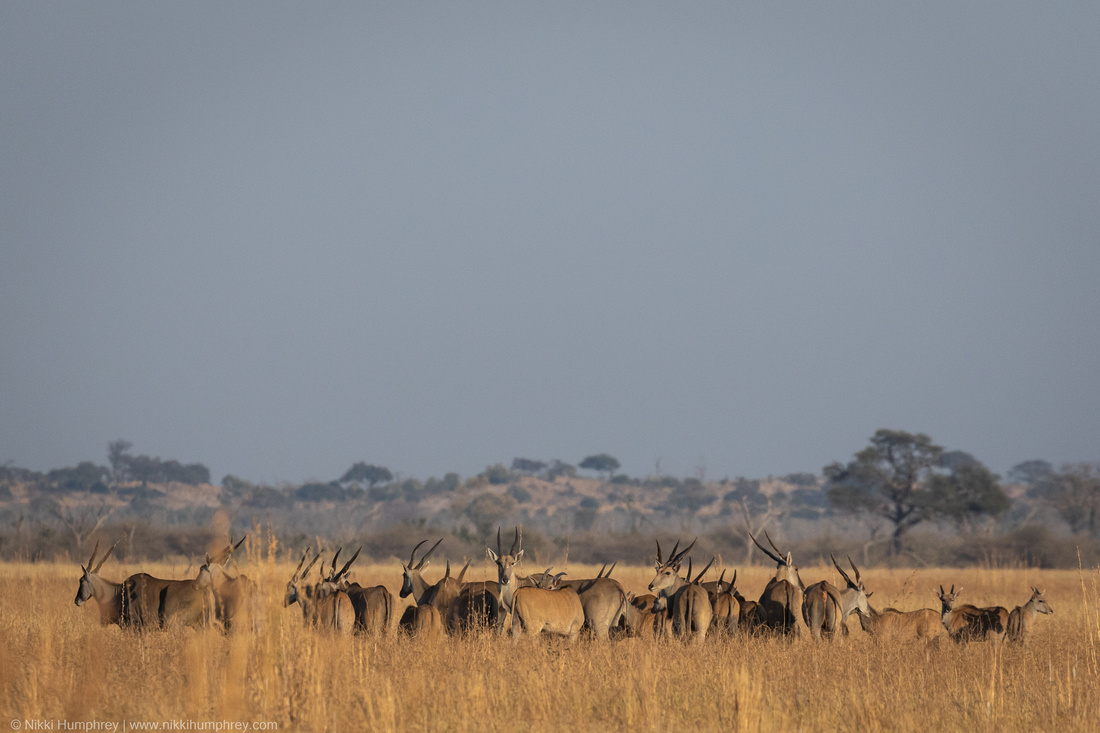 One of the largest Antelopes is the Eland, it is the largest in Southern Africa and can jump a 2m fence from standing! To think that such a large antelope can jump so high is astonishing. They are exceptional fast walkers, a human could not keep up with them on foot, the adults are rarely predated because of their size. Not my favourite antelope but certainly one of the most impressive. 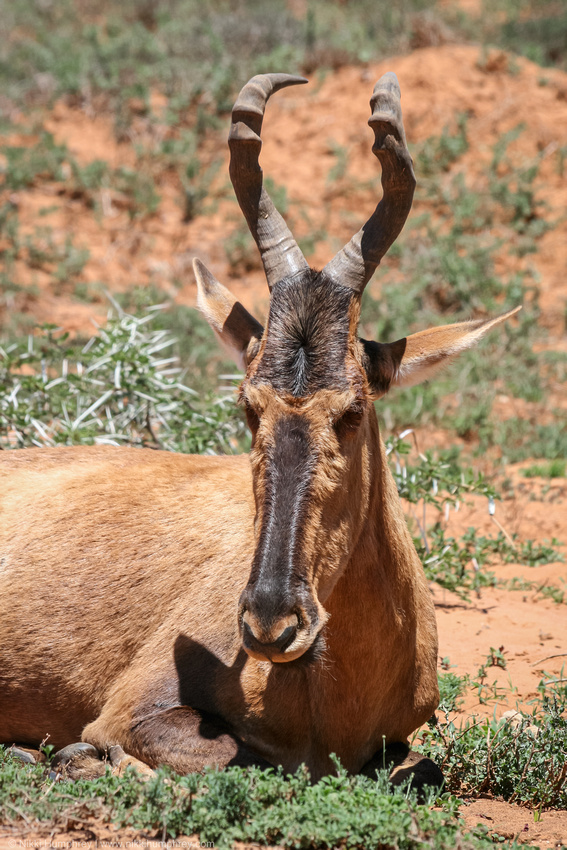 This is a Red Hartebeest, this was taken in South Africa back in 2008 and is the only photo I have of one, they were commonplace in South Africa once but the lack of habitat and poaching caused their decline, they have been reintroduced in some places and I was lucky enough to see this one.

Next we have the Thomson’s Gazelle found only in Eastern Africa. Nicknamed the ‘Tommie’ they are one of the fastest Antelopes and one of the fastest animals in the world, 4th fastest to be precise, it has to be in order to try and get away from it’s main predator, the Cheetah who of course is the fastest. They follow parts of the great migration of Wildebeest and Zebra they can survive on the grasses left behind after the huge herds have been through and decimated the grass. 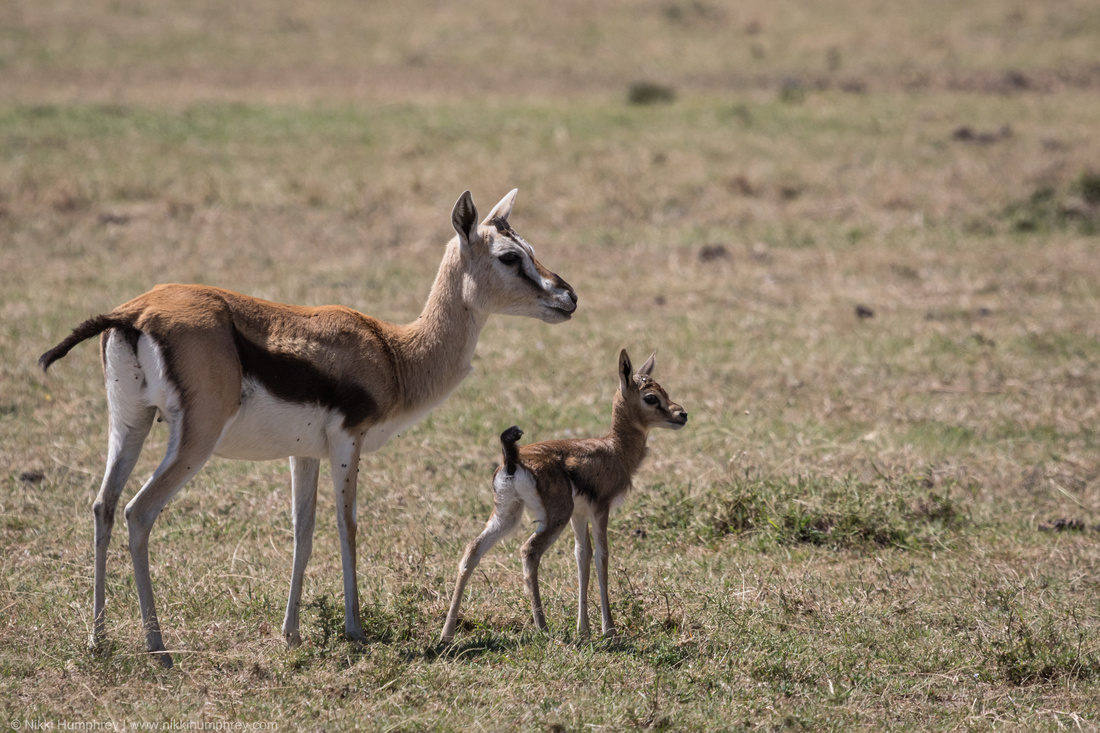 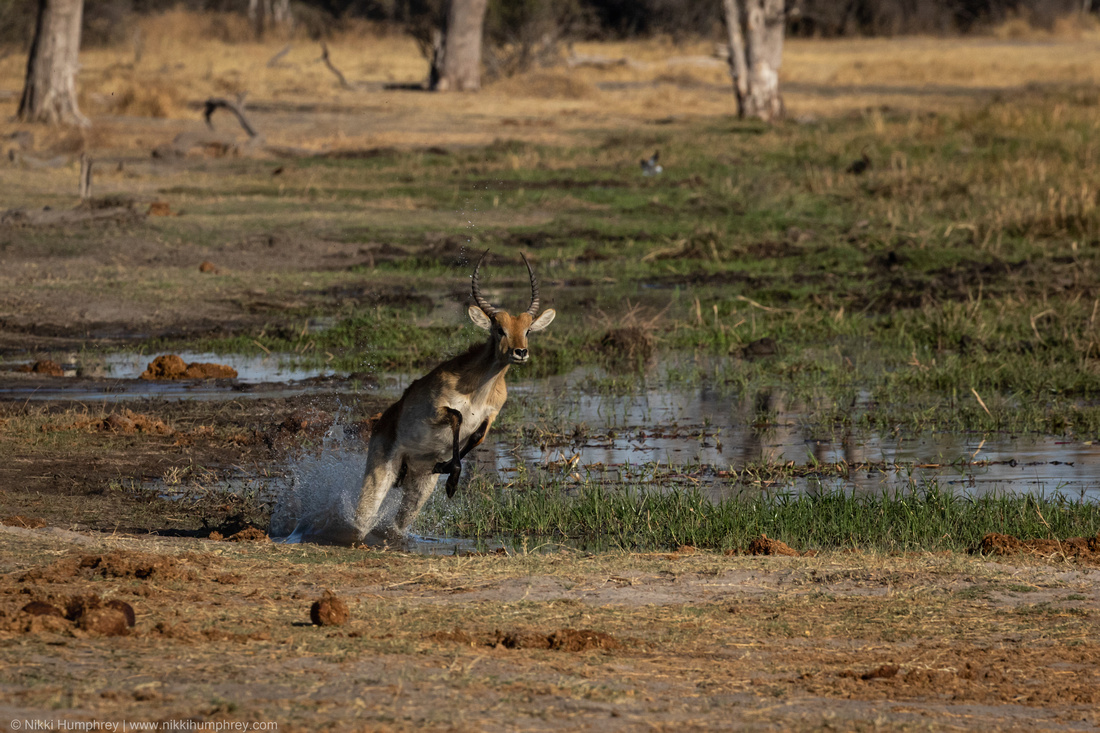 The Red Lechwe, found in watery, swampy areas, they eat the highly nutritious grasses growing in water meadows, they feed by wading into the water up to their bellies. They are crepuscular, being mostly active and feeding at dusk and dawn, when danger is near and they need to flee, they split in different directions and use their unique gait to flee danger which looks clumsy and slow on land but is the fastest through water.

One of the most beautiful Antelopes is the Kudu, the female with the big ears and liquid eyes and the males with the most impressive horns. When fighting the males can get their horns trapped together and can actually die in combat if they get very entangled with each other. 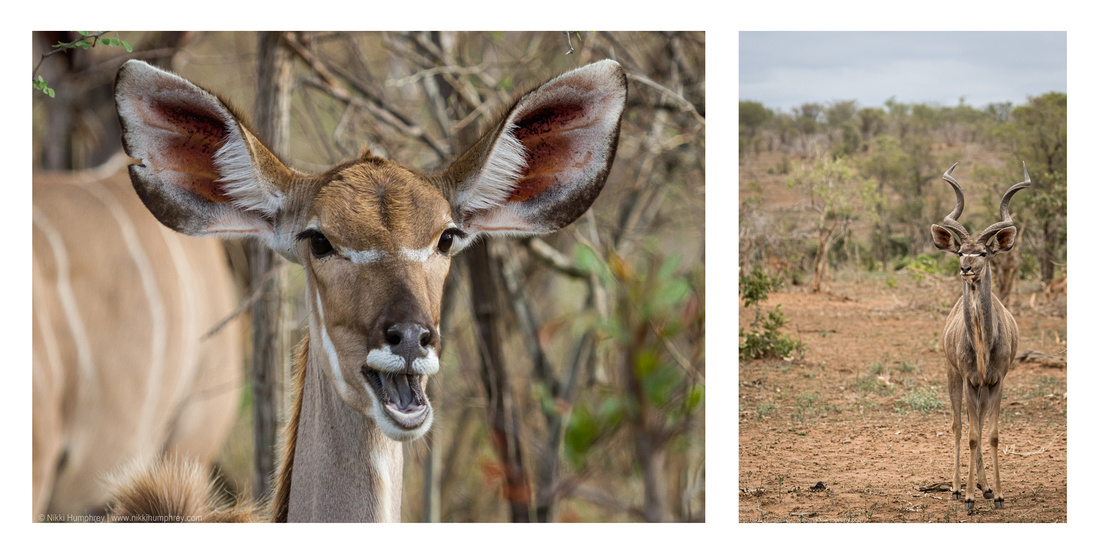 Their horns grow a turn in 2 years so a fully grown Kudu male is usually about 7-8 years old, that’s when their horns are fully grown in, they have the longest horns of all the African antelopes. They are the second tallest antelope with the Eland being bigger and can also clear a 2m fence from standing, how they do it with those horns, I just don’t know. They have such large ears to attract the most amount of sound as they spend the majority of their time in thick brush, they are browsers so they mostly feed of bushes and trees hence their usual habitat.

Turning to the smallest, the Dik-Dik, this being the Kirk’s Dik-Dik found in Eastern Africa. This was in the Maasai Mara in Kenya, usually found in monogamous pairs, I have only a few photos of them, this one was years ago. 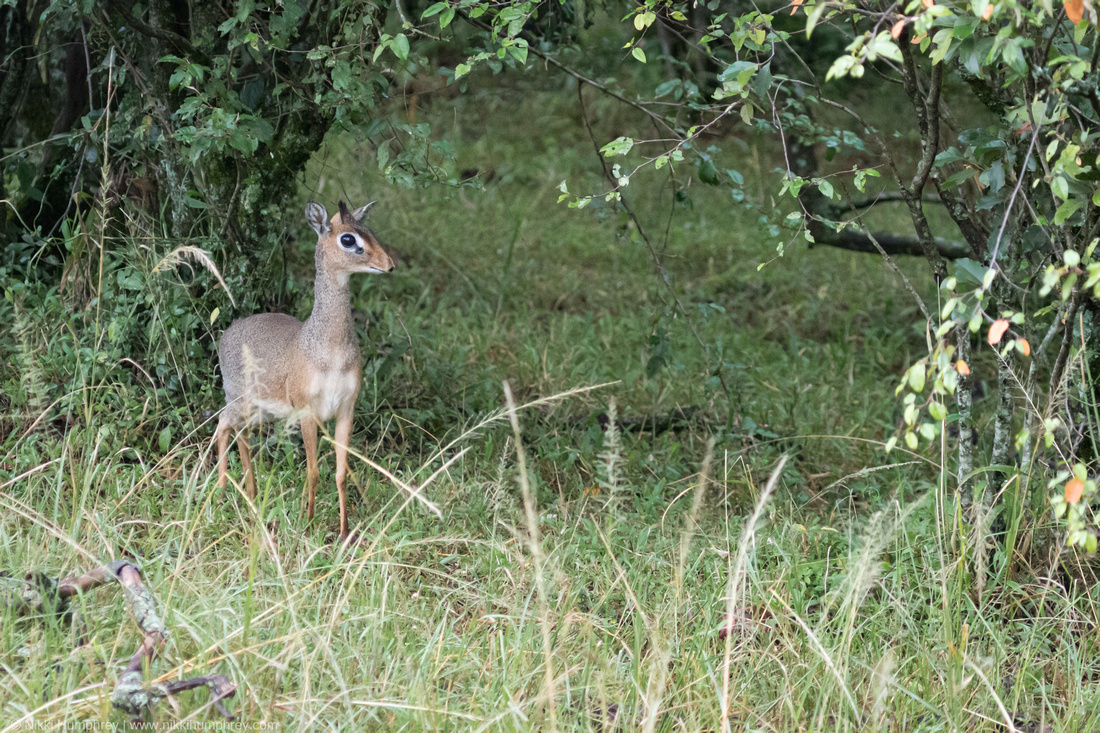 From one small antelope to the next, the Steenbok, one of my favourites. Driving around Kruger you can go days without seeing them and then have one day where you see 10. They have these tiny territories of up to 1km sq, so each one you see alongside the road is in it’s own territory. I’m sure it’s just coincidence but it’s happened to me so many times. They are such pretty tiny antelopes, they have monogamous pairings but don’t always spend their time together which reduces their risk of predation, to avoid that they run very fast and change direction really quickly. 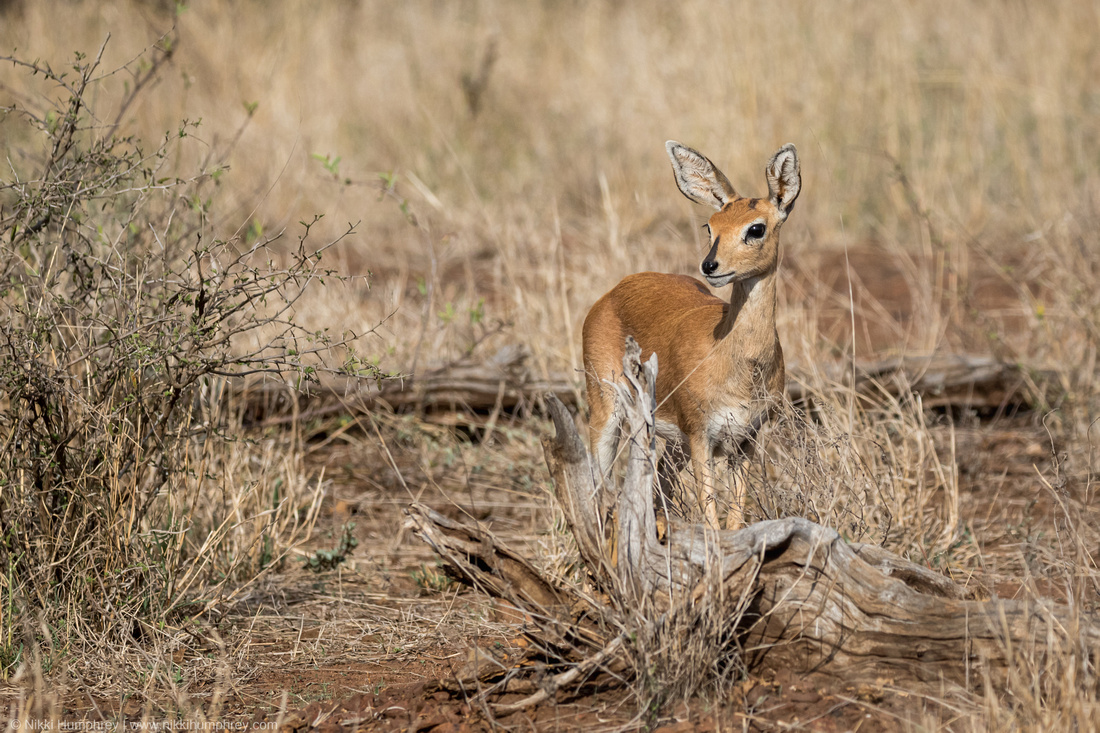 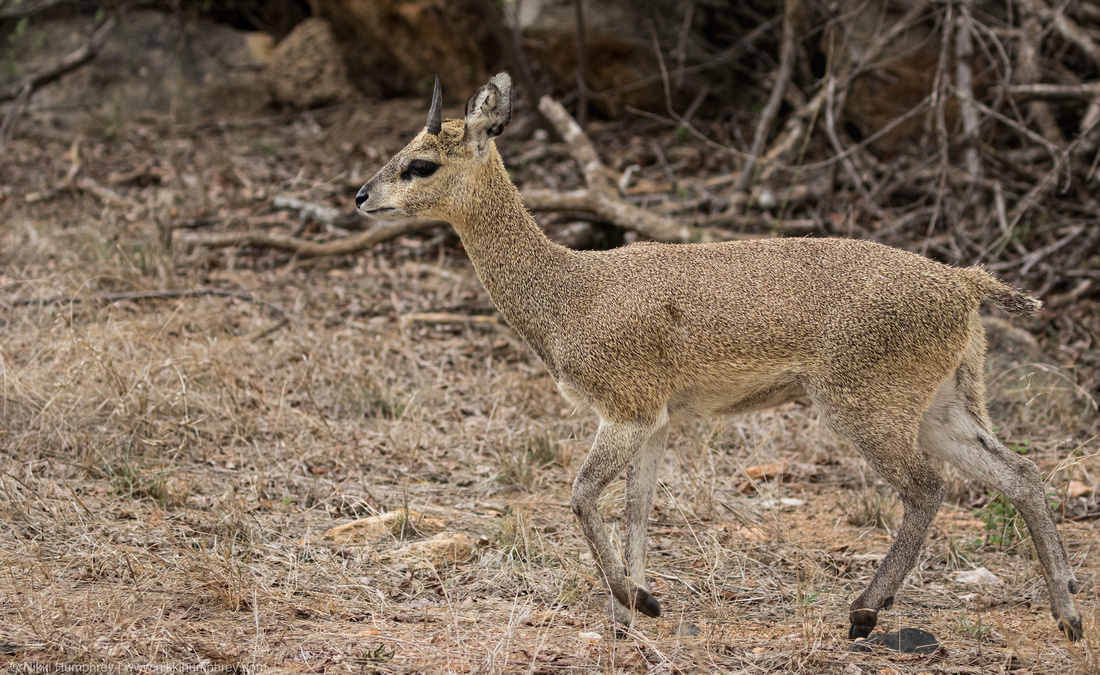 The next tiny antelope is the Klipspringer the small antelope that spends most of its time on rocky outcrops, their name means ‘Rock-jumper’, they have unique hooves, they essentially walk on their tip toes but their hooves have a special pad which allows their hooves to grip the rocks and absorb the shock of their landing. They also have hollow fur which has two purposes, it regulates their temperature (it gets in turn very hot and very cold on rocks) and it also protects them if they fall on the rocks, acts as a shock absorber. I love seeing a Klipspringers standing high up on the rocks overlooking their territories. 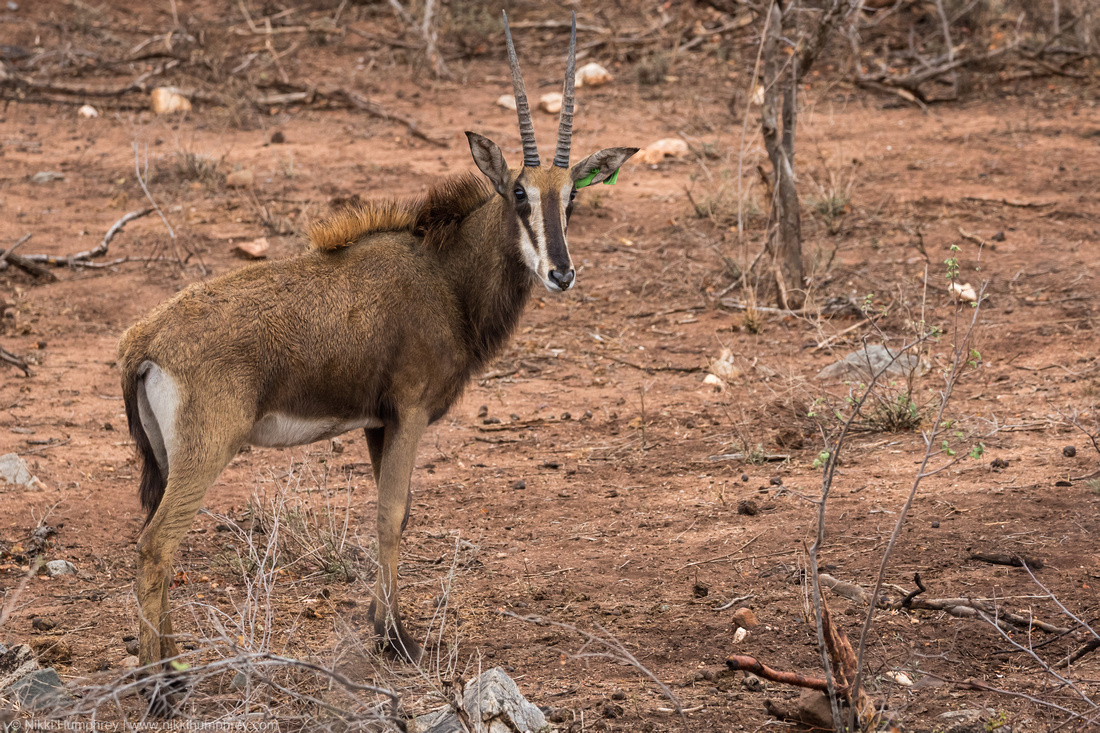 Back to larger antelopes again now and the Roan, originally a wide ranging antelope, their lack of habitat and poaching caused their numbers to decline, they are very rare in Kruger and this is the only one I’ve seen, it was one of an introduced herd in a private game reserve bordering the Kruger NP. Unfortunately the rest of the herd hadn’t made it (I can’t remember why) so this was the last one on this reserve – hence the ear tag.

This is the Nyala, one of the spiral horned antelopes, the males and females are sexually dimorphic – meaning the males and females look very different. The males have chocolate coloured coats, yellow socks and a mane that stands on end when they are posturing against each other, the females are a red-brown colour with white stripes along their coats. Another of the very pretty antelopes. 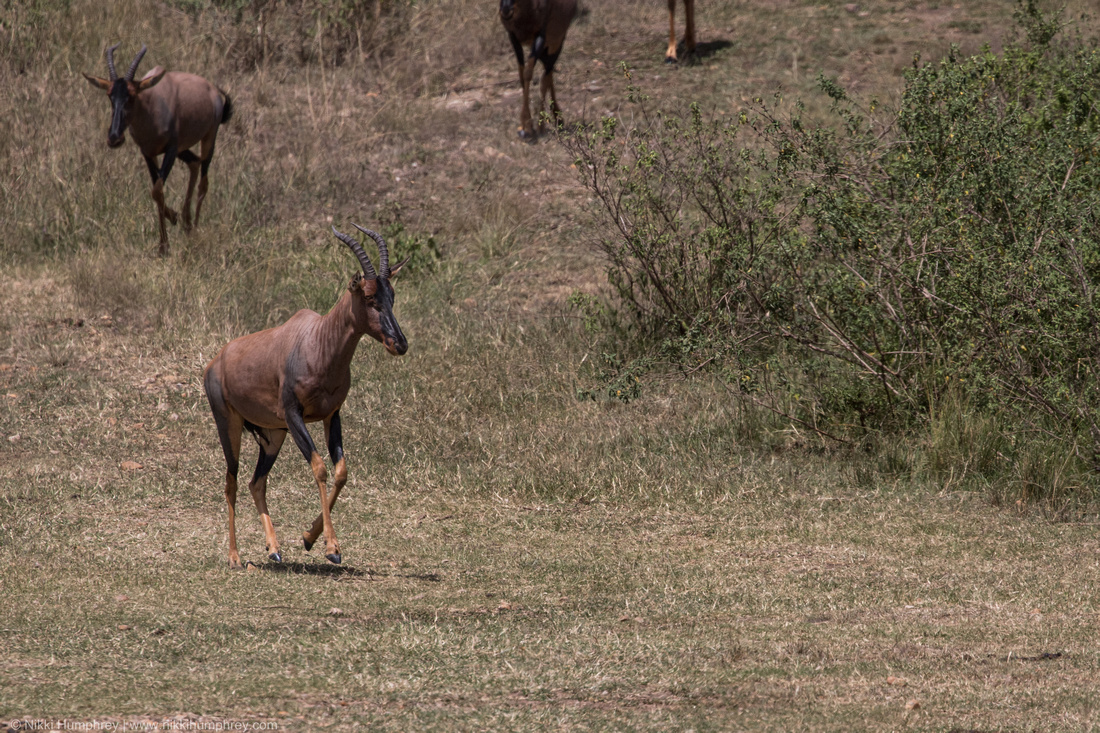 Onto the Topi, or as I like to call them ‘Topi on a mound’ in the Maasai Mara almost every termite mound has a Topi on it, they are similar to the Hartebeest in shape. They follow along with the great Wildebeest migration too. In Southern Africa they are called the Tsessebe but essentially they are the same creature, I’ve only seen them twice in Kruger NP. 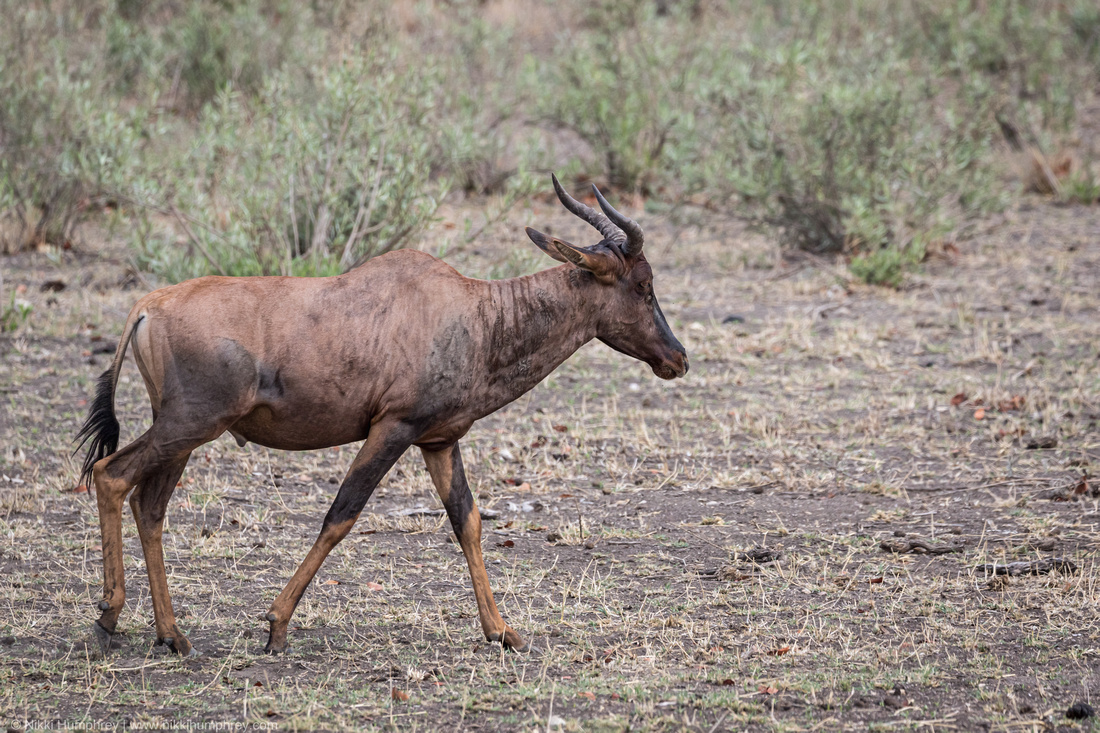 This one is the Common Duiker, another of the small antelopes, a greyish colour with a tuft of dark hair sticking up from it’s head, they prefer denser bush than say the Steenbok and it’s name comes from the way it ‘dives’ for cover. 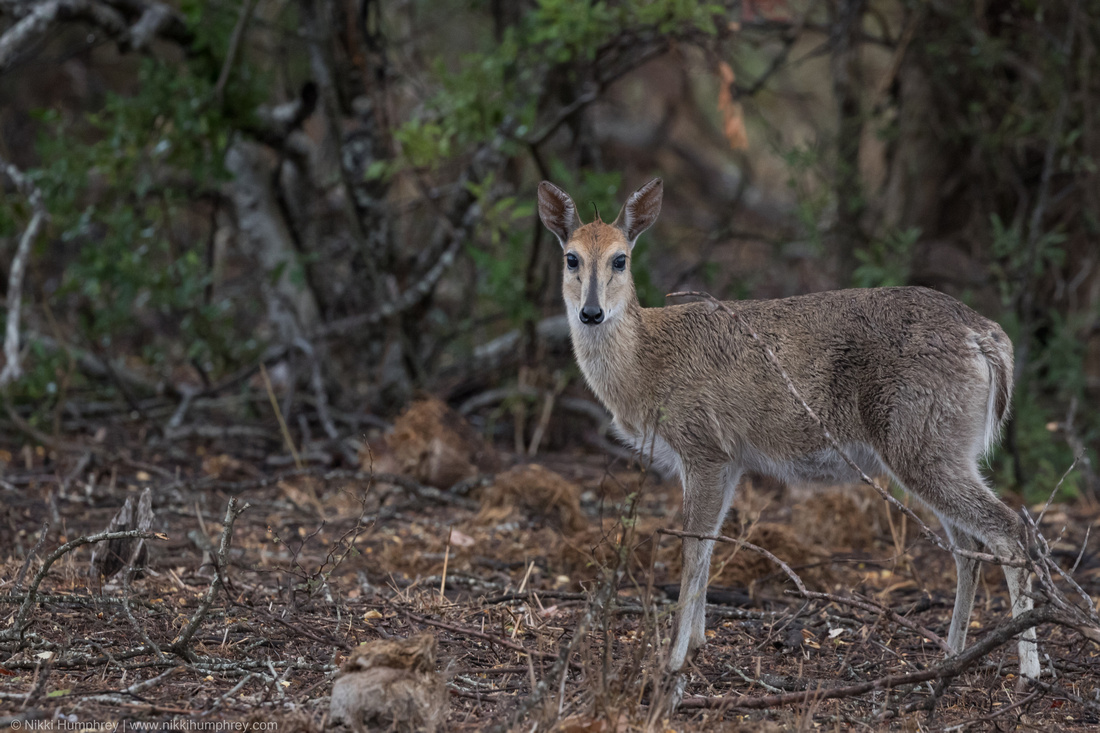 The Bushbuck is another of the mid-level Antelopes, but the smallest of the Spiral Horned Antelopes. Their alarm call is a deep bark that doesn’t seem like it should come from such a small antelope, they are the antelope I have seen most in the company of human habitation, in the grounds of the private lodges in the game reserves surrounding Kruger NP, they have learnt that there is food around the grounds (kept green for the visitors) and that there is safety (less predation) in the company of humans to the point they wander around the rest camps in Kruger. 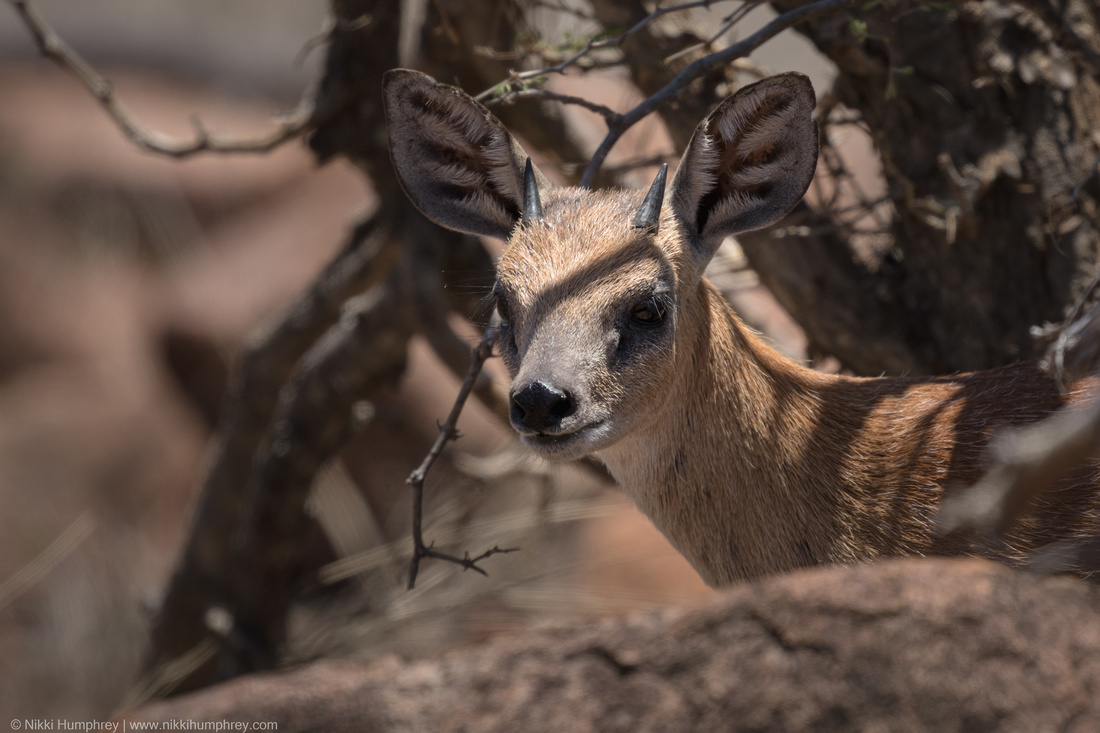 This pair is the Waterbuck, as the name suggests, where you find Waterbuck, within 2-5km you will also find water, they are incredibly water dependant. They have the most unique ‘follow-me’ sign, the white ring around their rear end. They have a scent gland in their skin that is particularly strong, they aren’t the preferred prey for predators but they are predated, they are hunted by humans too and both human and predator has to be very careful not to contaminate the meat with the scent gland, the males especially secrete the liquid and can be smelt from 500m away.

Next up we have the Springbok, an animal I have only seen once in Etosha NP in Namibia back in 2010 – hence the less than brilliant photo. The national animal of South Africa they have become very adapted to the drier climates and will drink when water is available but they don’t need it as much as others. They get their name from the pronking run they do. 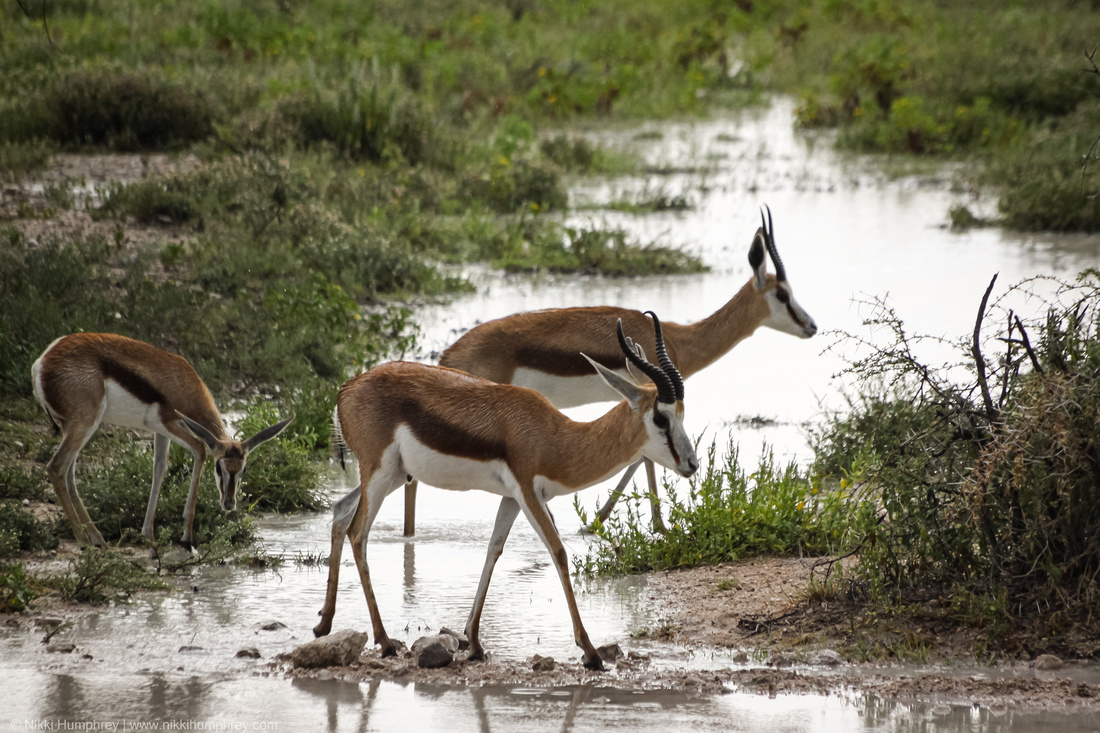 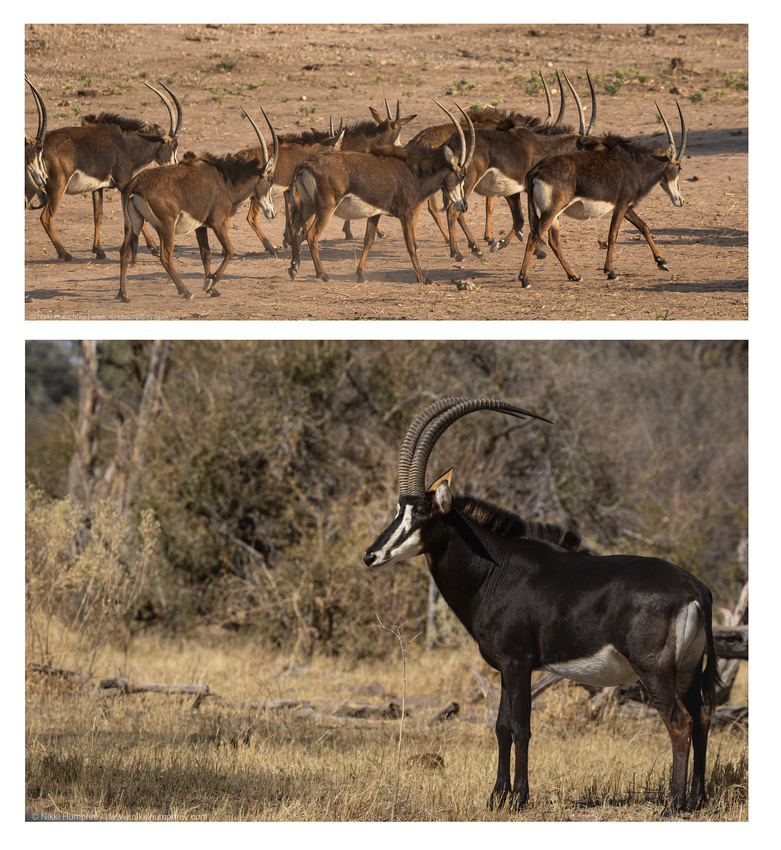 This one is the Sable, one of the most beautiful antelopes. With their large curving horns and dark brown to black coats – females with the brown, males with the black. They are, to me, one of the most elegant of the antelopes. The females and young form herds whereas the males tend to claim a territory where they try to keep a herd of females within, so the strongest bulls will have the best territory – water, food etc.

The desert adapted Oryx or Gemsbok is an antelope I’ve again only seen once so far in Etosha National Park and therefore only have these distant photographs of them, with their 1m+ backwards curving, incredibly sharp horns. The males and females look very similar and travel in mixed herds but there are also the solitary, possibly territorial (still under investigation) males. At the highest intensity fighting the males try to stab each other with their sharp horns, but this is a last resort. 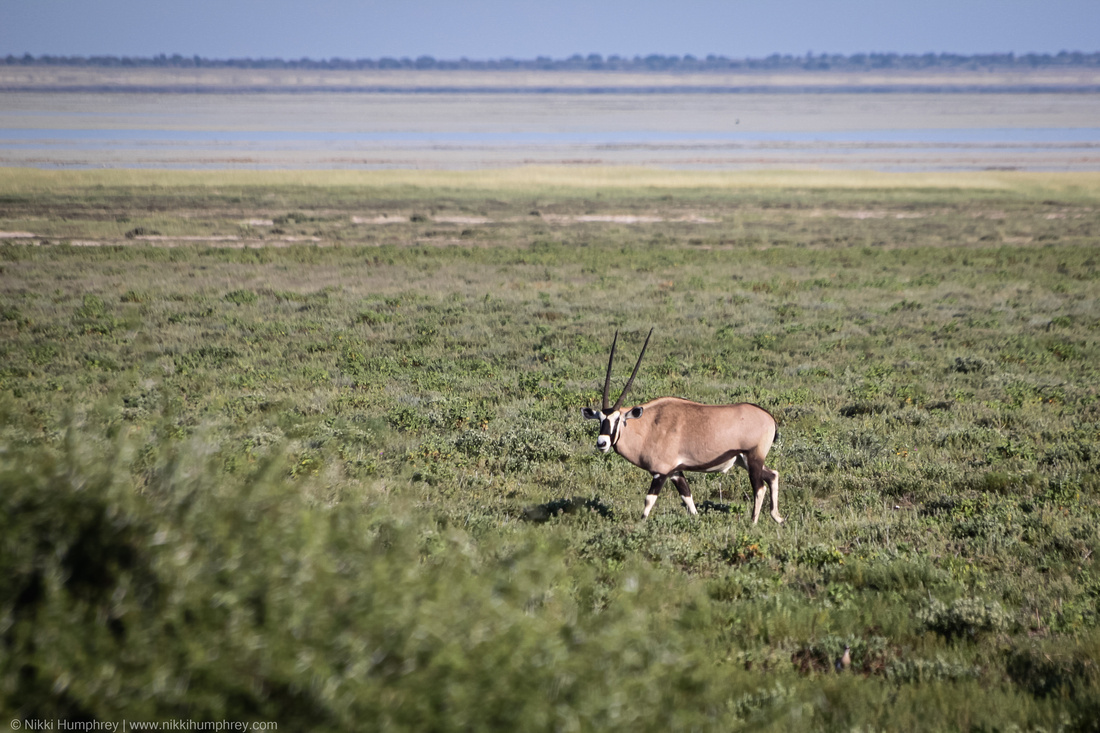 This is the Common Reedbuck, an antelope not often seen and often overlooked, they are a shy species preferring to hide in long grassland, mostly living in monogamous pairs but separately and are mostly nocturnal.

As I wrote this blog I found myself more and more curious about the size order...so...

" The smaller females are considered ewes while the larger males are called bulls.  Any antelope the same size or smaller than a female nyala will have their sexes describes as rams and ewes [young -lambs] and any antelope the same size or larger than a nyala bull will have their sexes described as bulls and cows [young - calves]"

Here endeth the Antelopes... Hope you enjoyed my little exploration into the world of the underlooked.