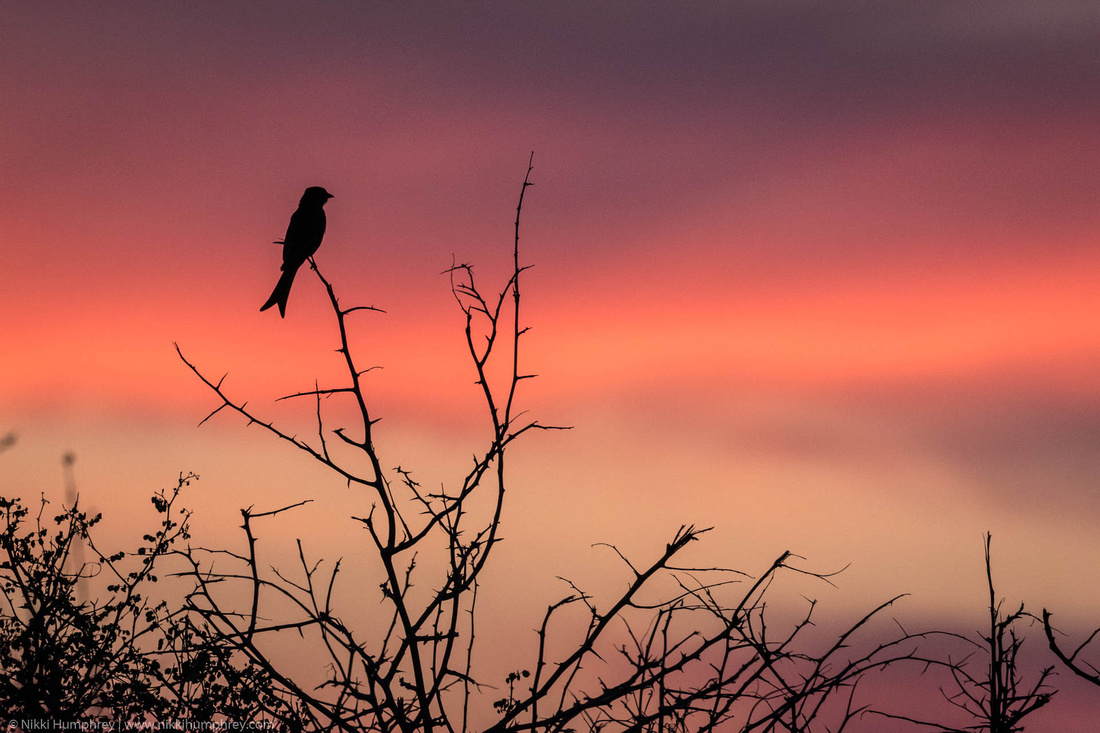 A Fork-Tailed Drongo, a bird that sounds like a drunk R2D2, is very commonly found in the bush and is often overlooked. They have this lovely characteristic forked tail - handy and they are often found around large mammals walking through the bush - why? Well, as the animals move through the bushveld, their movement stirs up insects from the grass etc which the Drongo likes to catch and eat. This is known as a Commensalistic relationship where one party gains all the benefit but through no harm to the other party. So the mammals gain no advantage to this but they aren't harmed by it either.

It's an excellent mimic and will mimic the sound of a predatory bird to make another species of bird drop it's prey so it can have an easy meal. Usually found singularly or in pairs, or during a bush fire, large numbers. Widely found in Southern Africa. 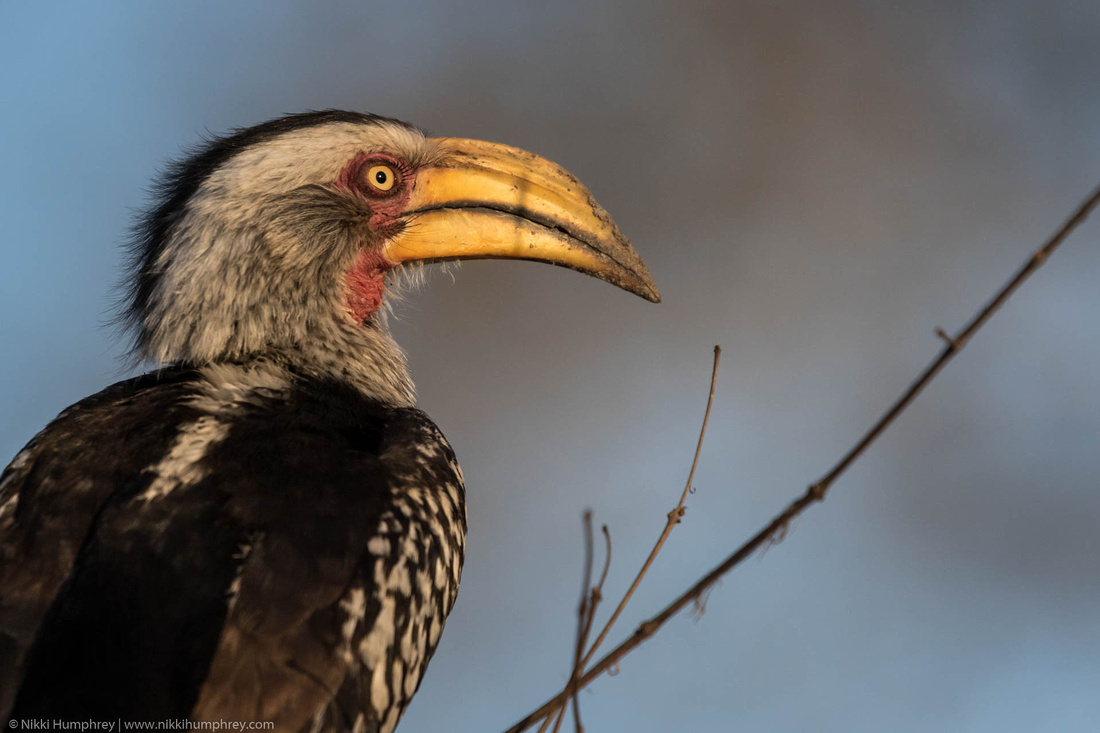 Then we have the Southern Yellow-Billed Hornbill, I'm pretty sure you can't go to Kruger without seeing one of these. The smaller birds are harder to identify and can be overlooked but no can overlook the mighty banana bill, or 'flying banana' as they are often known. They are common in the northern parts of South Africa but common throughout Botswana, Zimbabwe and Namibia as well.

They always sound like they are laughing at you, and their call is very similar to that of the Red-Billed Hornbill so in my mind they were always laughing that I couldn't tell which is which when they call. I still get it confused in the field sometimes. A beautiful bird though and they can become quite habituated with people, knowing that at picnic spots they will get an easy meal, and will come really close to you. I've never fed them but when they look at you with their heads cocked to one side, it certainly makes you want to.

With the Yellow-Billed Hornbill we have a Red-Billed Buffalo Weaver, a part of the large Weaver family who are known for huge nests or colonies of small nests. The Red-Billed Buffalo Weavers build a large nest usually in a large tree or an electricity pylon and it will contain different chambers within it, each chamber with a nest in. Sometimes the male is polygynous, so has many females in in one nest and/or multiple nests but some males create coalitions and join together to assist with raising the chicks. They have a distinctive red bill but also a flash of white along the wing - that's always my go to to ID them, red bill, white flash. (I'm sure there are many more ways to ID and more scientifically correct ways but that's mine). 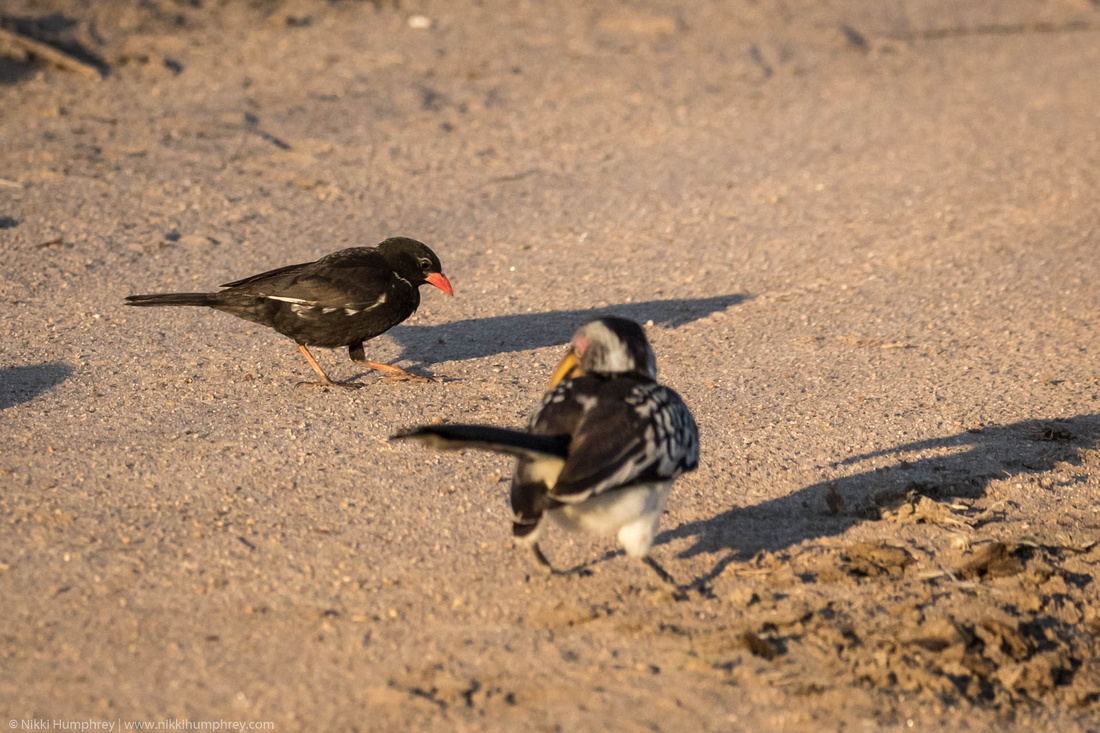 The stunning Burchell's Starling is up next, a dark blue bird until you look closely and see the multitude of colours within their feathers. The iridescent sheen to them shimmers with blues, greens and purples, the Burchell's has a dark eye and slightly larger than it's Cape Glossy cousin, it's the largest of the glossy starlings and stands tall which gives the idea it's much bigger than it's smaller cousins. Found only in the Kruger region of South Africa it is also found in Namibia and Botswana and likes woodland and savannah habitat. 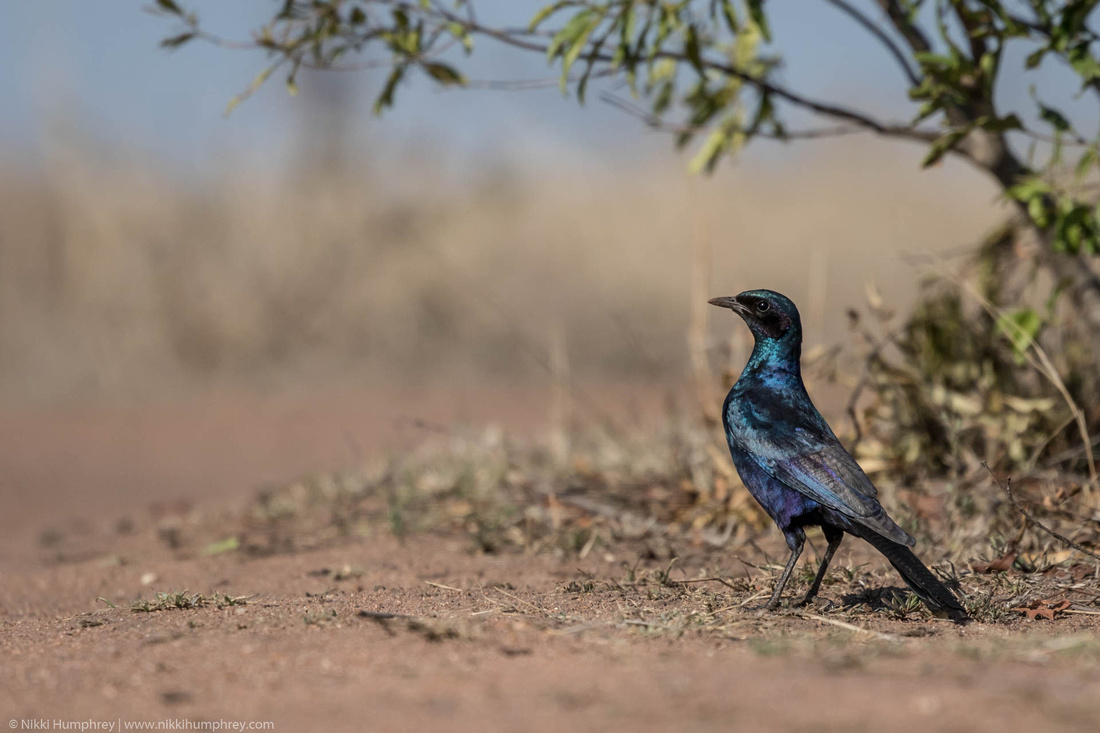 One of the greatest noises comes from this one, the Red-Crested Korhaan, bill snapping and then a piercing whistle (see video just below). Until their are courting you can't really see their red crest, I have yet to photograph it so I can't show you but I do love seeing these in the bush, they are always smaller than I remember. They are part of the Bustard family where the smaller bustards are known as Korhaans, again the northern part of South Africa and across the continent from Namibia, Botswana and Zimbabwe are generally where you see these.

The male attracts a mate by flying high up in the air and dropping suddenly like it's been shot before gliding to the ground, it is known as the 'Suicide Bird' the object is to open it's wings at the last moment to save itself and therefore proving it's the best male around. (insert female eye roll here!) But it works on a Korhaan. In the same family is the Black-Bellied Bustard, who makes the most remarkable popping noise, like a water drop into a bucket or a cork popping out a bottle. It's wonderful. I've only heard it once or twice on my trips but managed to get the smallest clip of it. A very handsome bird with that beautiful black belly, slightly taller than the red-crested korhaan, found from sub-Saharan Africa all the way down into South Africa, prefers savannah, open grassland type areas and prefers higher rainfall which may explain why I've only seen them after heavy rain in the Kruger area. 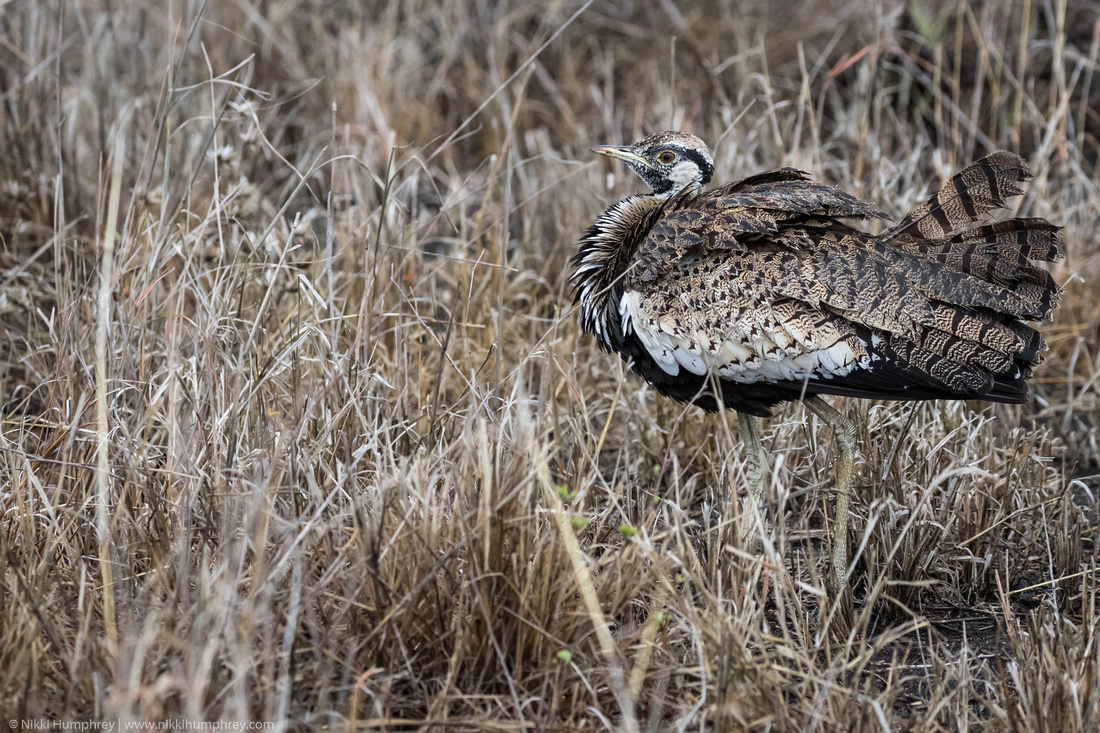 Let's finish up with the Southern Red-Billed Hornbill, the 'Flying Chilli', also laughs at me for not knowing whether it's a red or yellow billed Hornbill. Slightly smaller than the Yellow-Billed and with a bill that is narrow and more pointy (so scientific) and of course it's red, not yellow. Also found at picnic spots where it scavenges from humans but you can take advantage of that and get some good shots of them. As with most hornbills during nesting season, the female is walled up in a tree cavity with only a small hole left open, she then moults all her feathers and waits for the male to bring her, and then the chicks, food before she breaks out and they fledge. What a huge amount of trust she displays to be sealed in a hole, loose all her flight feathers rending her unable to fly and relying solely on the male. Incredible. 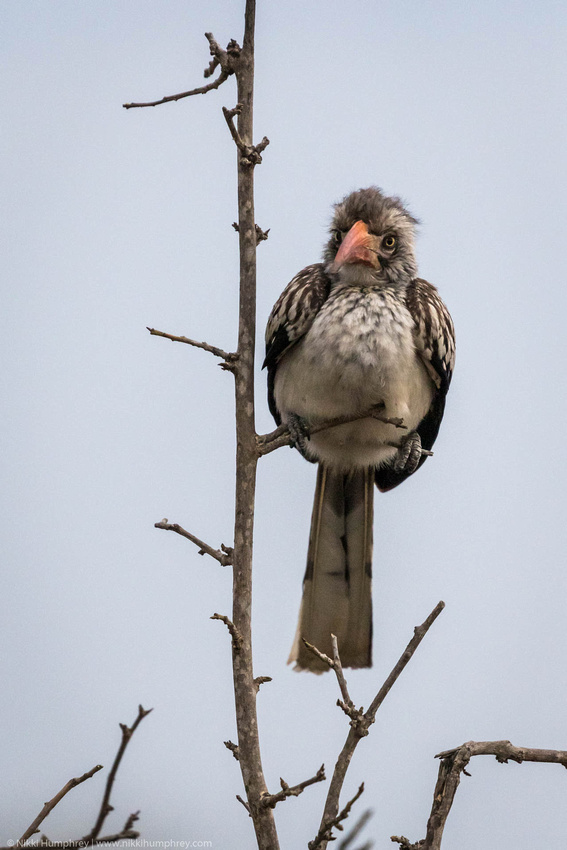 Thanks for reading, hope you enjoyed it and keep an eye out for Part 3...