Parts One and Two

So first up lets talk about the first whale I saw in the Azores, one that shouldn't really have been there at all. The Fin Whale. The Baleen whales (Humpback, Fin, Blue, Sei) are usually found in the Azores in the earlier part of the year, April/May time, so to see one in July was unusual, not impossible but certainly a thrill for me. 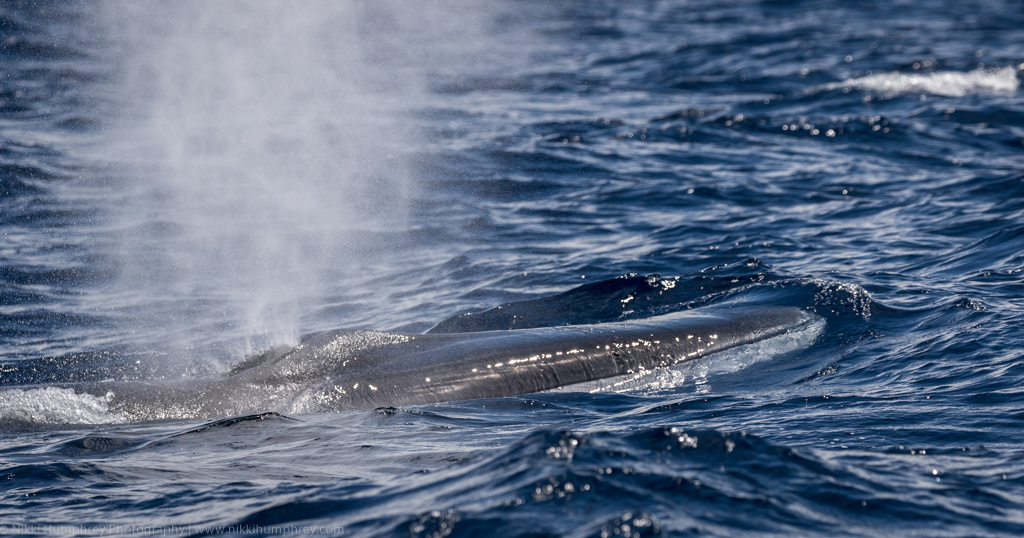 It really allowed me to see their Asymmetrical jaw, the left side of the jaw is dark and the right side is light. The only whale to be asymmetrical, whilst I have seen Fin Whales in the past, I've never seen the white jaw as cleanly as I did here.

It wasn't my only Fin Whale, another morning we saw two of them travelling along together.

They are one of the fastest whales, getting up to speeds of 25 knots, the second largest whale, the females are longer than the males unusually and they are filter feeders, surviving on fish, squid, and crustaceans including krill and copepods. This is where the baleen comes into play, the whale takes a large gulp of water and prey, using the baleen plates to push the water out of their mouths and leaving just the food which they swallow.

I was thrilled to see a Hammerhead Shark whilst out on the water, I actually saw two but both days in fairly rough water, the first was a day with very large waves and a grey sky and I was unable to get a shot of it either above or below the water. Even to my eye it was a dark shape through the water, the second one was a much brighter day so I was able to make out the hammerhead shape of the shark. I did take a shot through the water and here it is, I can make out the head, can you? 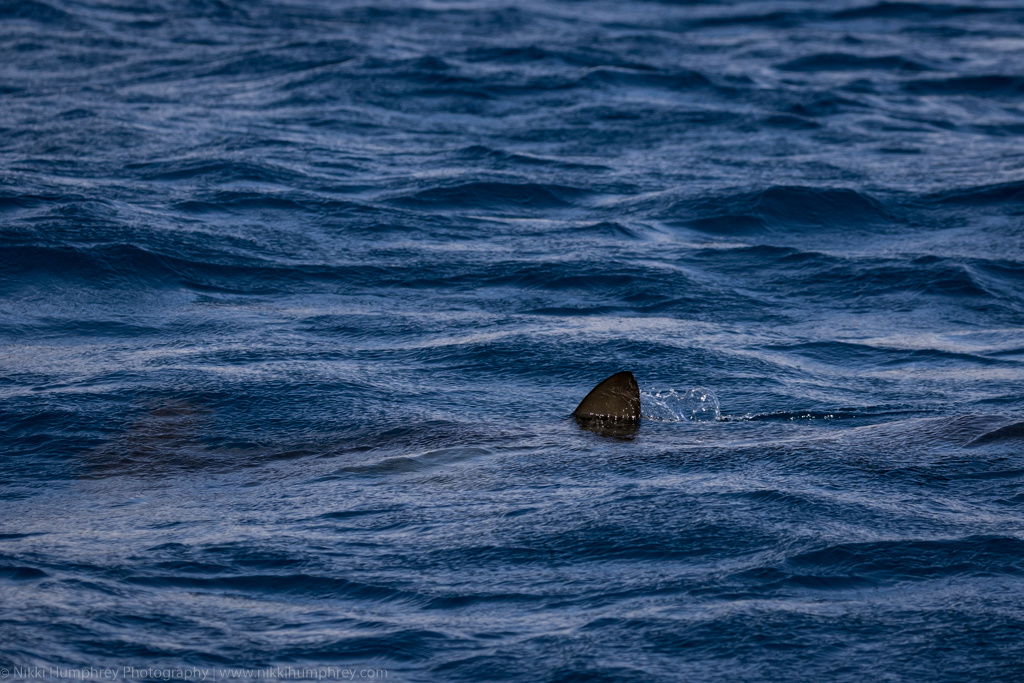 Hint: It's to the left side of the image! 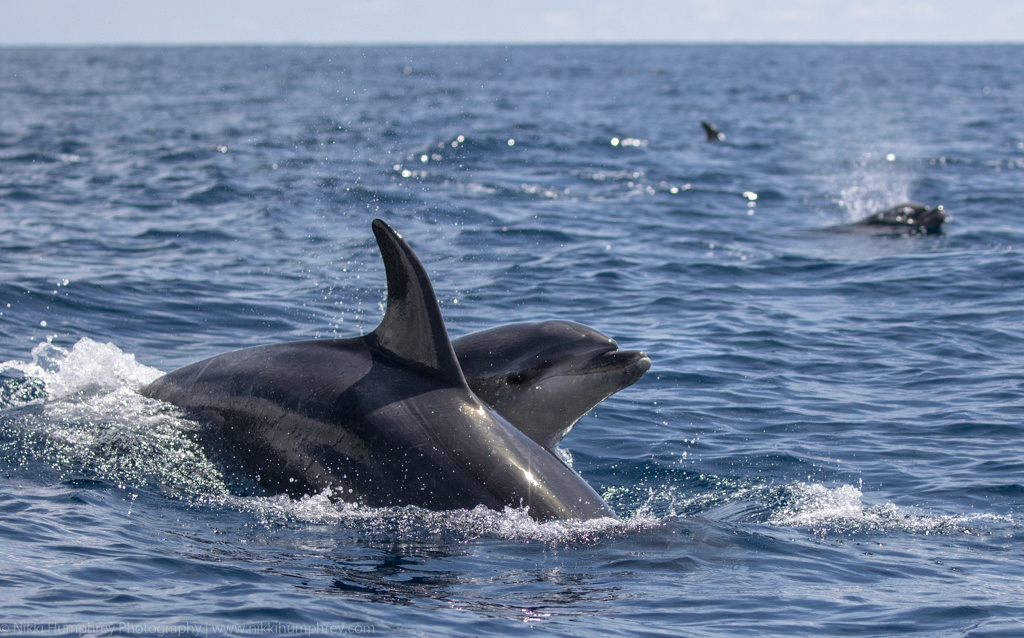 Another resident species in the Azores is the Bottlenose Dolphin, everyone knows it, many have seen them, they are visible all around the world and is the quintessential 'dolphin'. These are the dolphins that started my love of dolphins and whales, so I'm always over the moon to see them in the wild where they should be. The resident Bottlenose Dolphins in the Azores live close to shore but act a little more like Risso's, they are more elusive, not so quick to interact with the boats or with people. The ones I got to see were the offshore Bottlenose dolphins, they are slightly larger and darker than their inshore cousins, they are more willing to bow-ride, interact with the boats and with other species too. They also congregate in larger groups, and we did see some large groups which is fantastic to see but makes it hard to know where to point the camera.

I thought since everyone knows so much about them already, here are the photographs I took. 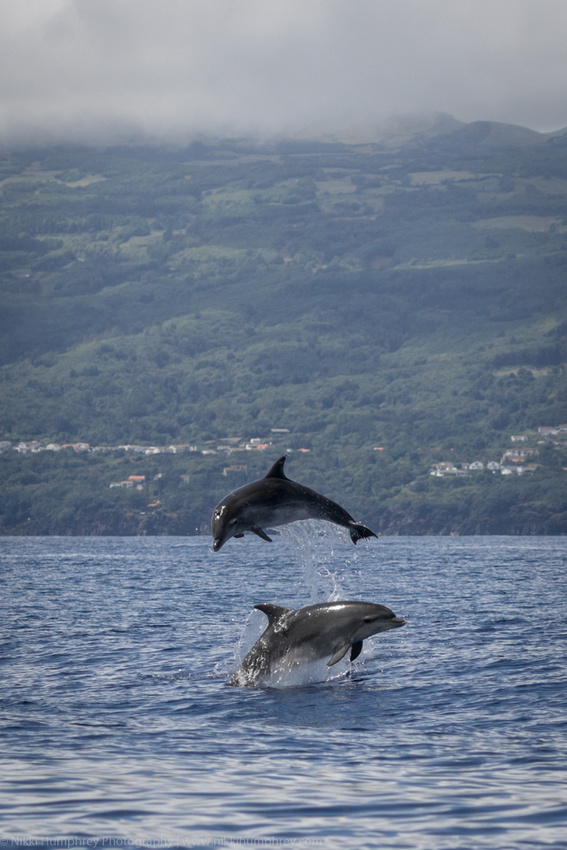 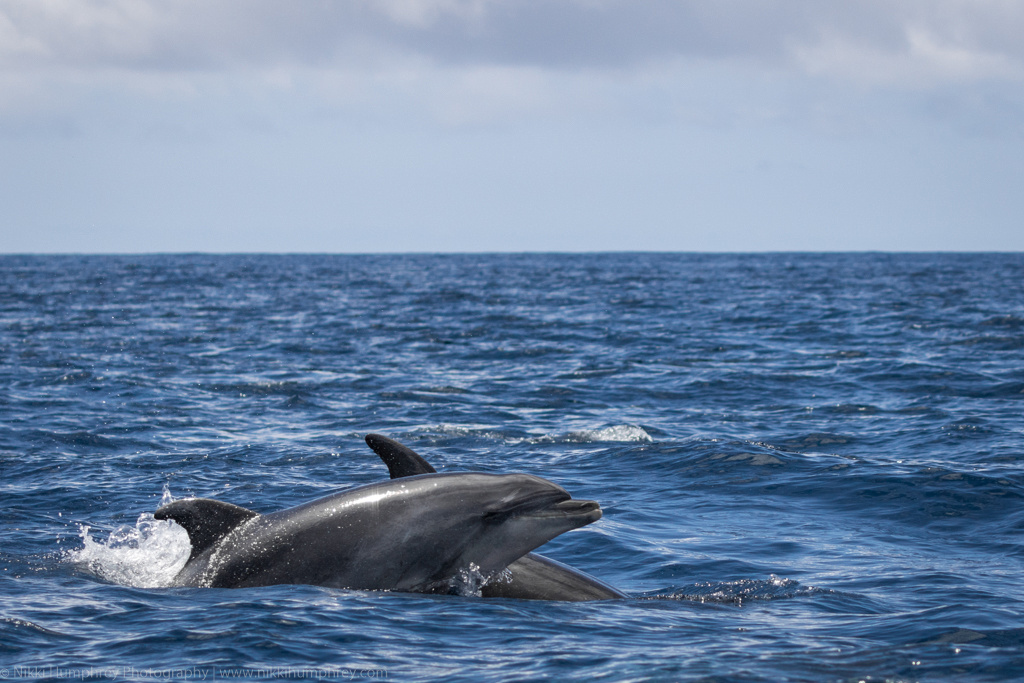 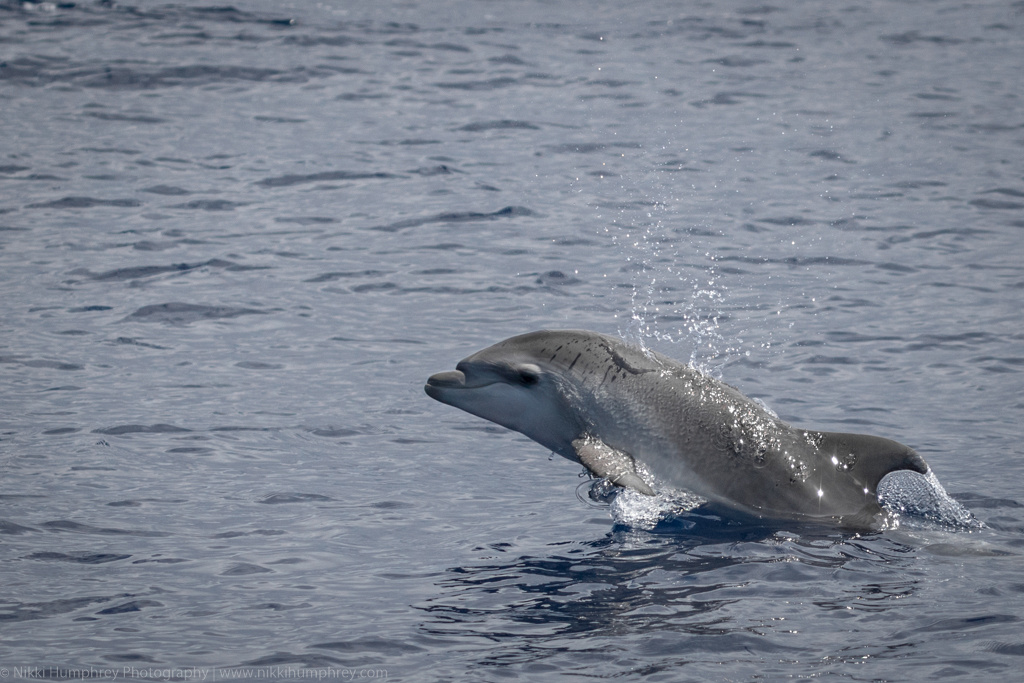 This is a very small baby Bottlenose Dolphin that I was lucky enough to photograph. You can't really tell scale but it was about a quarter of the size of an adult. 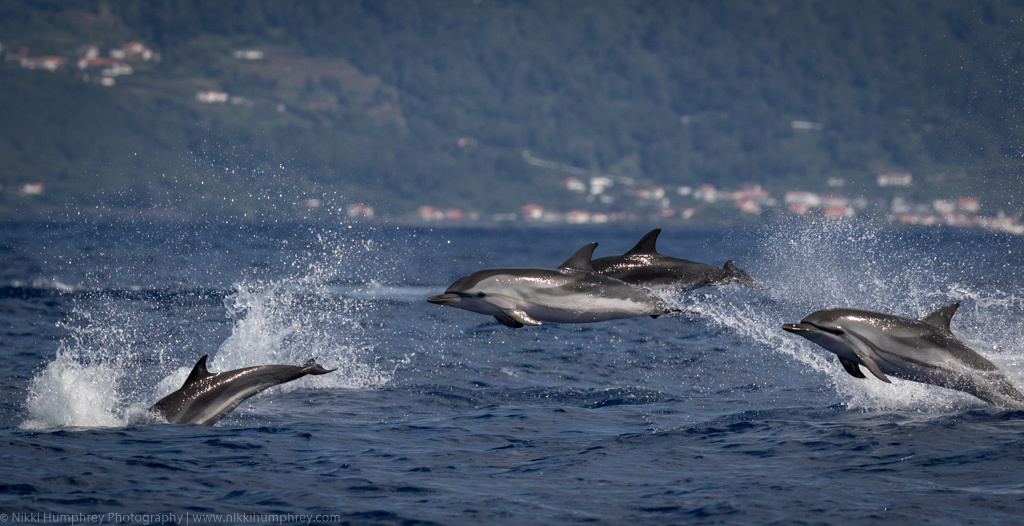 One of my new favourite cetaceans is the Striped Dolphins, I don't remember seeing these 10 years ago, but now I need to see them again. They are fabulous, they aren't the most sociable of dolphins, and tend to 'take off' when you get close to them. As there is less resistance in air than in water they 'travel' by leaping out of the water, back in and almost straight back out again, many times all you end up with is photographs of splashes, but by watching where they went in the water, and moving with them you can manage to photograph them coming out of the water or mid jump. This is essential in seeing their absolutely beautiful patterns, in my opinion they are one of the prettiest of the dolphins, what do you think? 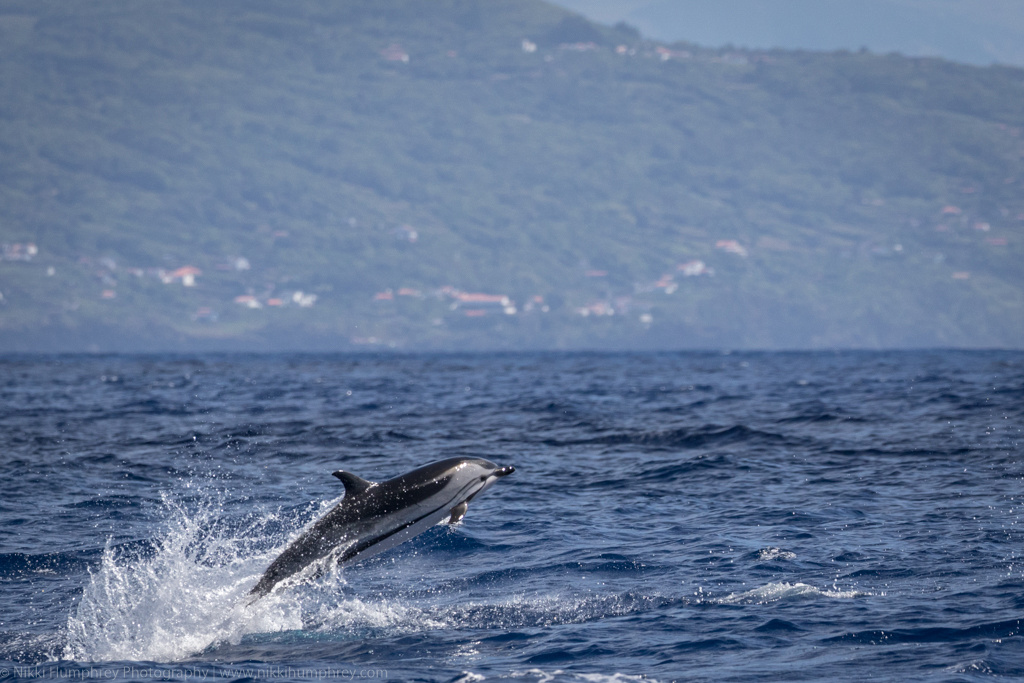 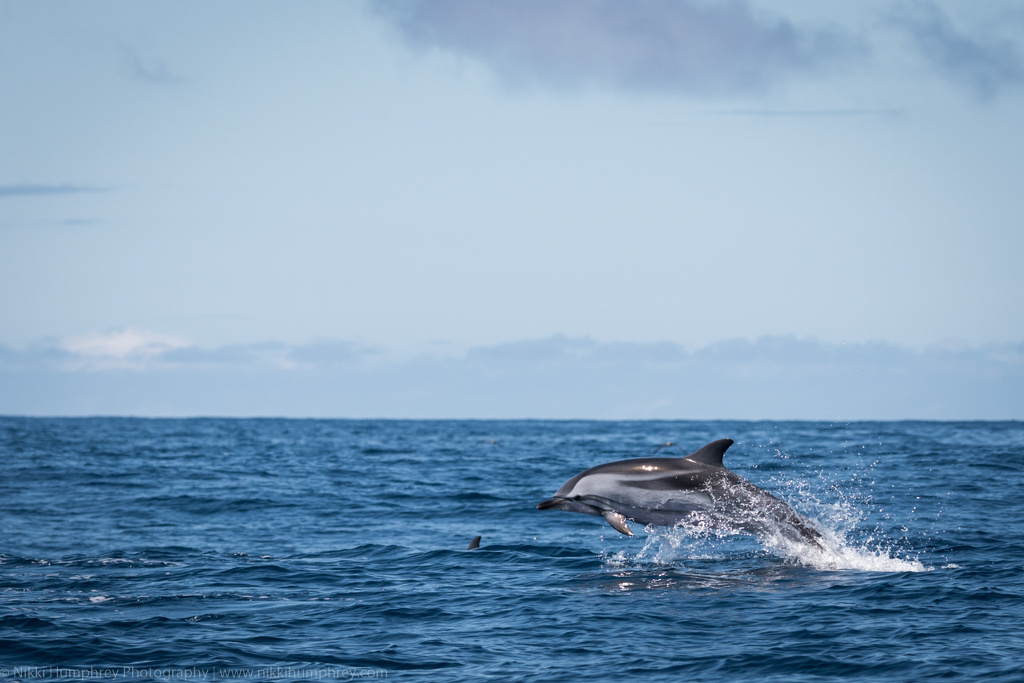 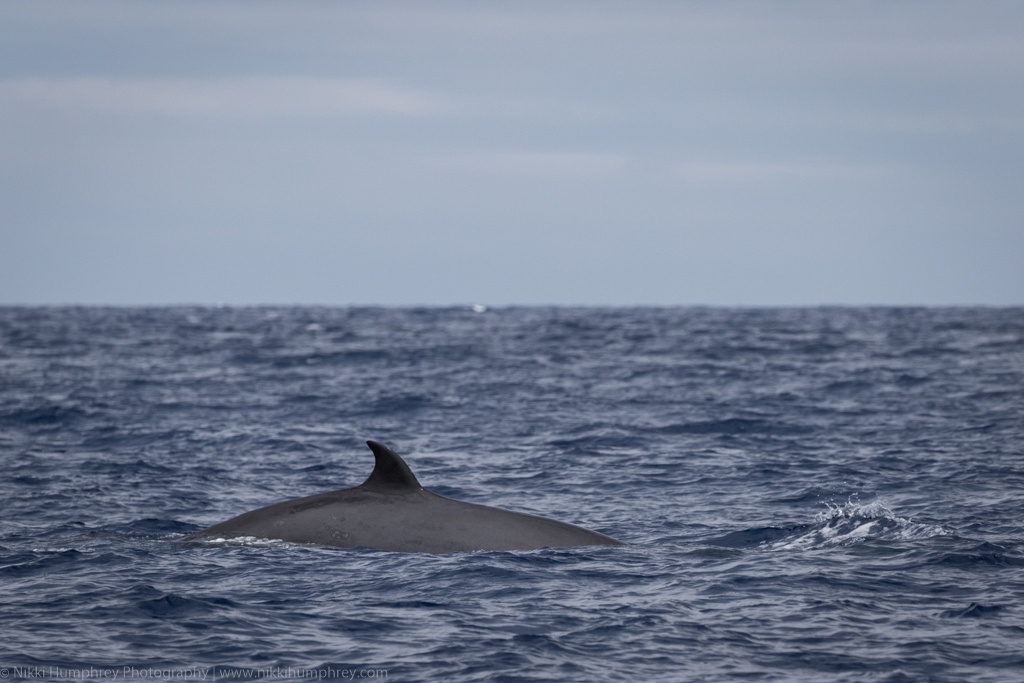 This was my second time to see, luckily, the Northern Bottlenose Whale. I remember seeing them 10 years ago very briefly but the boat skippers and group leaders were pretty excited, back then I didn't really get it but now I know how lucky it is to see them. They are a cold water species, found in cold northern hemisphere waters. Every year in the Azores, in the warm water part of the year, a small group of these whales turn up, they seem to mostly be males and without knowing really why, to me, it seems like there are on a boys holiday. They are hard to photograph, because they pop up and breathe for a few minutes then they dive down again, where they can be underwater for up to 40 minutes, and turn up in a completely different place as well as heading away from the boats more often than not. They don't get very much of themselves above the waterline often, so you get a lot of fins and blows but not much else. A few times they headed straight for us and I was able to get a bit of the head. 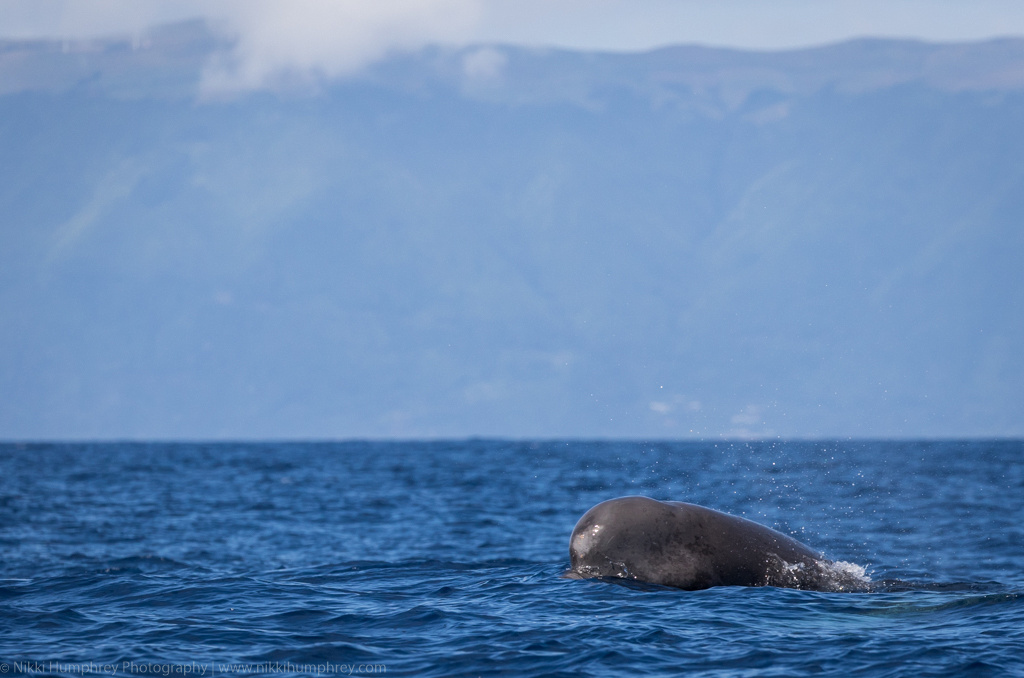 They are large beaked whales, with a bulbous melon with a dark yellow-brown colouring, although that really does depend on what weather you see them in, sometimes they look brown/pink and other times grey. I saw them on every trip for 2-3 days in many different sea conditions, light and weather. 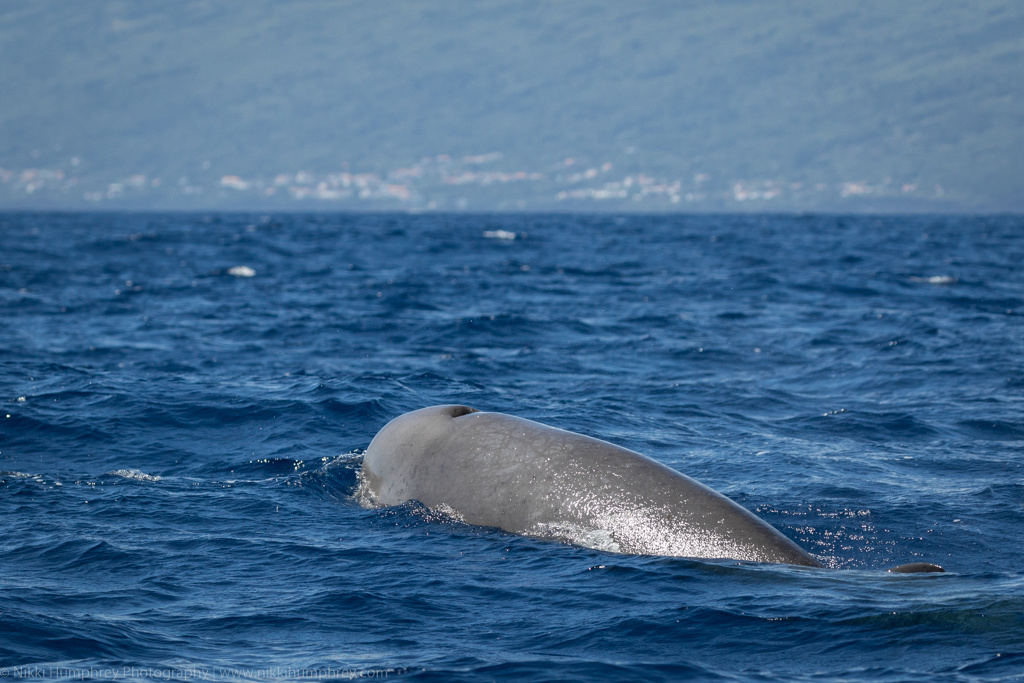 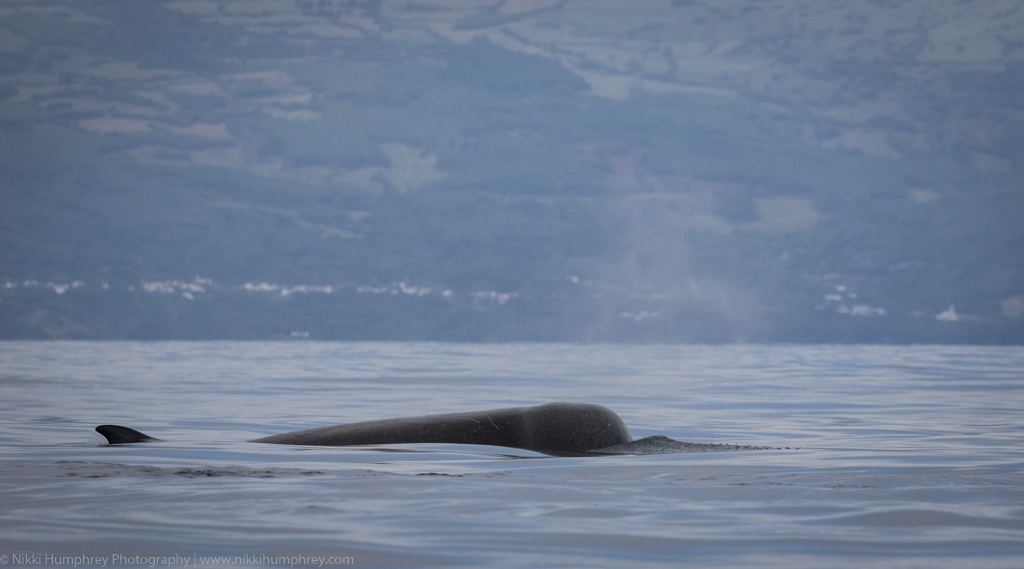 The Portuguese Man O' War is NOT a Jellyfish… this fact completely blew my mind. They are named as they are due to their resemblance to the 18th century Portuguese sailing vessels. 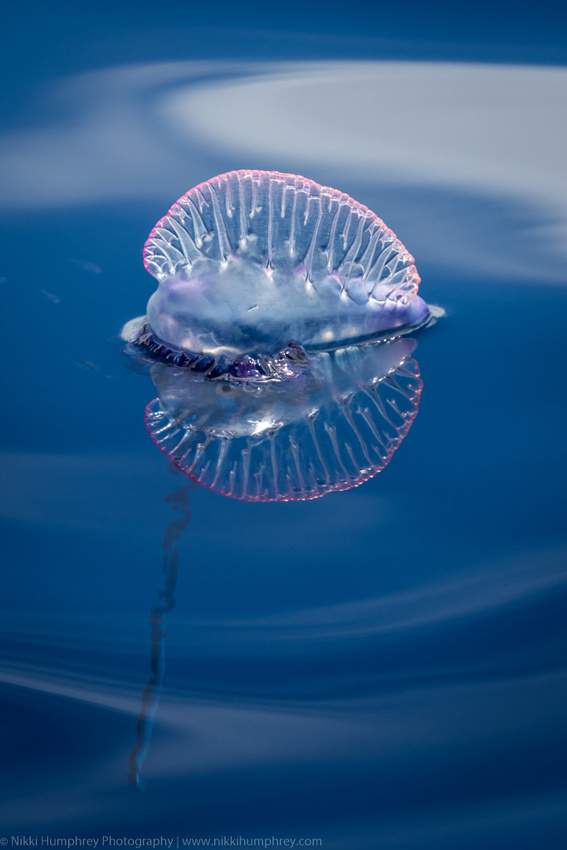 It is a colony of many different organisms, the part you see on the surface of water is a sail full of gasses, which can be deflated if the colony is attacked allowing it to dive below the surface for safety. The tentacles are usually 10m but can get up to 30m, they are venomous and often sting swimmers, they are also known as Blue-bottles and wash up on beaches all around the world. However, when you see them floating past (because they can't swim, direct or plan their route – they are at the mercy of the wind) they look beautiful, their 'sails' are shades of blues, pinks and mauves. We were lucky enough to find one on a flat, calm day which allowed me to get shots really highlighting those colours as well as being able to see the tentacles flowing through the water. 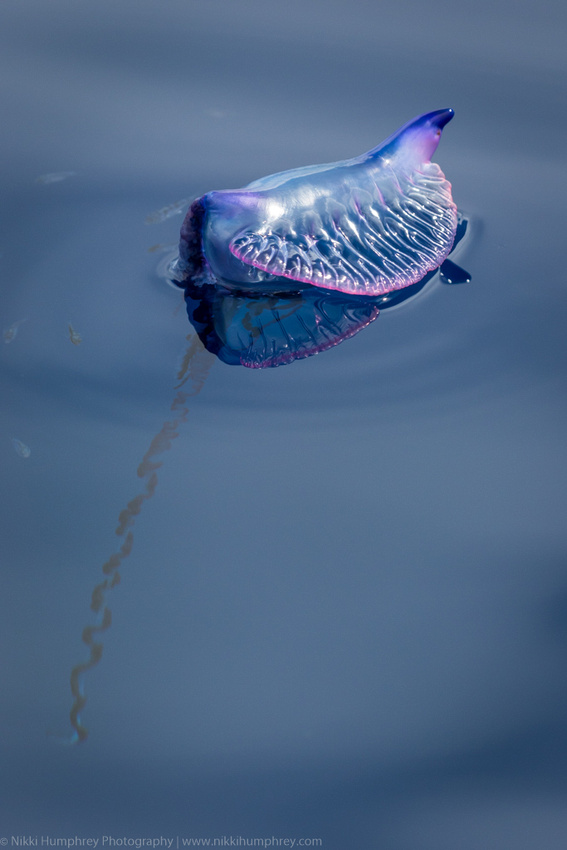 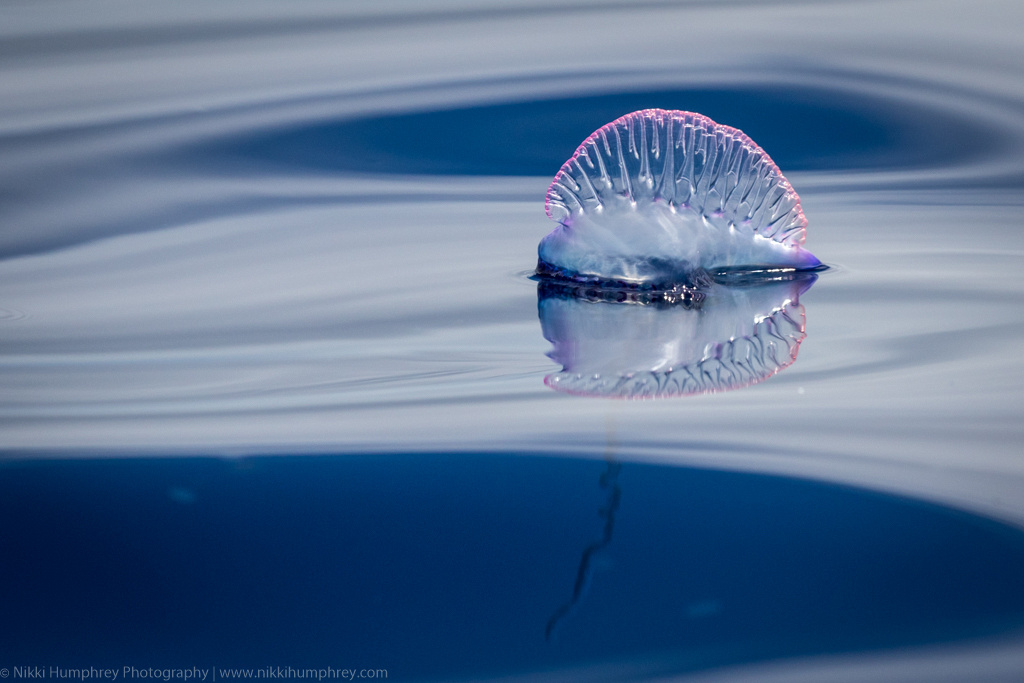