Azores 2017 - Introduction and Part One

10 years ago, as a birthday present, I went to the Azores to swim with wild dolphins, with a friend of mine. It was a fantastic trip and I had bought a waterproof case for my point and shoot camera to be able to try and capture some photos of the dolphins underwater. I was unsuccessful in getting anything useful while swimming along, with the super speedy dolphins swimming past at a rate of knots. My best shots came from hanging off the side of the boat, holding the camera under the water and pressing the shutter button whilst hoping there was something in the viewfinder. Luckily a few times there was and this was one such photograph.

I remember seeing Dolphins of all types, but the Spotted Dolphins struck a cord with me, their beautiful spotty sides and their joyful antics, I hadn't seen them anywhere else unlike their counterparts, the Bottlenose or Common Dolphins. I also remembered the joy of watching a Sperm Whale fluke as it dived down deep and the fact I had seen a rare species, the Northern Bottlenose Whale (briefly). Having only a had a point and shoot camera had meant all my above water images showed indecipherable blobs of grey matter that I could only tell you were dolphins. I knew I wanted to go back in the summer months because it was the best chance to seeing the summer visitors of Spotted Dolphins, possibly the Northern Bottlenose Whales and of course I knew the resident Sperm Whales would be there for viewing.

I had been saying for years I needed to go back and see what else I could see whilst marvelling over the photos taken by two of the boat skippers of 'Espaço Talassa' one of the oldest, most responsible (and best) whale watching company in the Azores. These two guys, Pedro Madruga and João Quaresma take some of the best whale and dolphin images I see and I knew I had to go and try my own luck.

Turns out it's way more difficult than they make it look.

The animals move (some fast, some slow), the boat moves – in a direction and with the waves, the sea never stops moving and I did pretty well at staying upright let alone pointing the camera in the right direction. It really was more of a challenge than I thought it would be, but oh, so worth it.
I spent a total of 30+ hours at sea and saw 12 different species of whales and dolphins, as well as least 5+ other species of fish, reptile and organisms. 4-5 of those whales and dolphins I had never seen before which was hugely thrilling for me, and I got to see a few species that were 'out of season' (more on that later).

It turns out I have a lot to tell you about my trip to the Azores so I will be doing a series of blog posts, talking about the different species and showing you the photographs I took of them.

You may have already seen my post about the Risso's Dolphins (here) so I won't cover them again, so moving on… 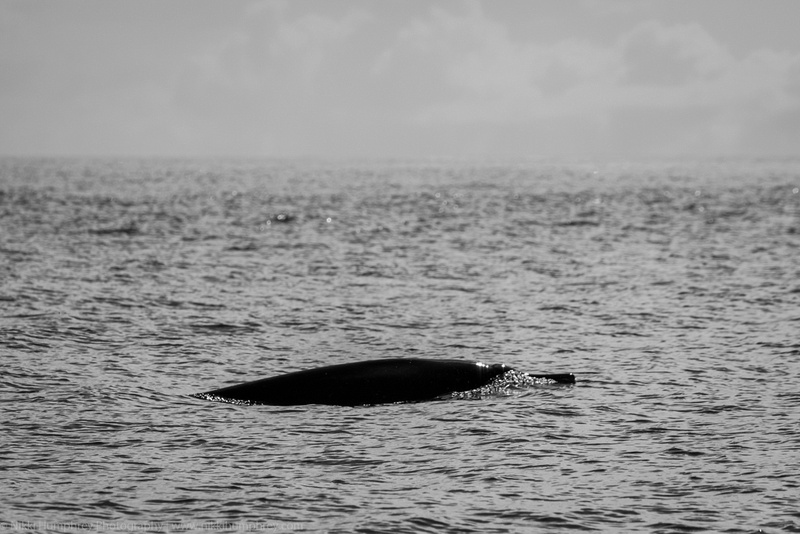 This is a Sowerby's Beaked Whale, we came across a large pod of them, the beaks breaking the surface of the ocean followed shortly and swiftly by the rest of their bodies. They are quite fast and unpredictable meaning photographing the beaks and heads was a challenge, as was the light, although I managed to get this shot of the beak coming out the water but the angle of shooting into the sun's glare meant it has to be a silhouette type shot. The small dark marks beyond it are the backs of other Sowerby's beaked whales.

This one shows the multitude of Whales in the area...

Originally named by an Englishman named Sowerby, after the examination of the skull of a beached whale found in the Moray Firth in Scotland. They live mostly in the Northern oceans, the North Sea and the North Atlantic. They are rarely sighted so to see them is something special and to see this many was thrilling for me. Here are a few of the shots I did manage to get, then they disappeared like they were never there 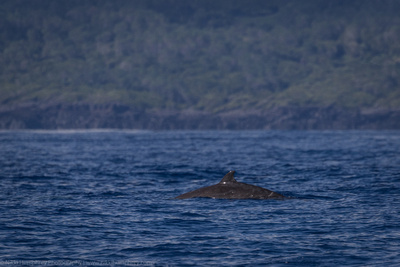 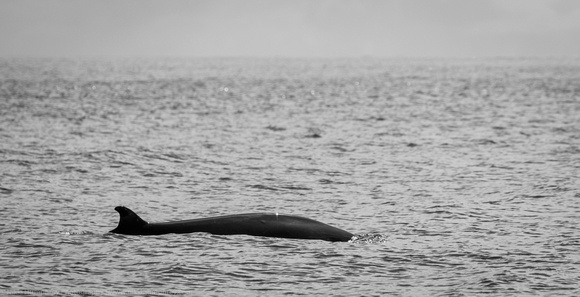 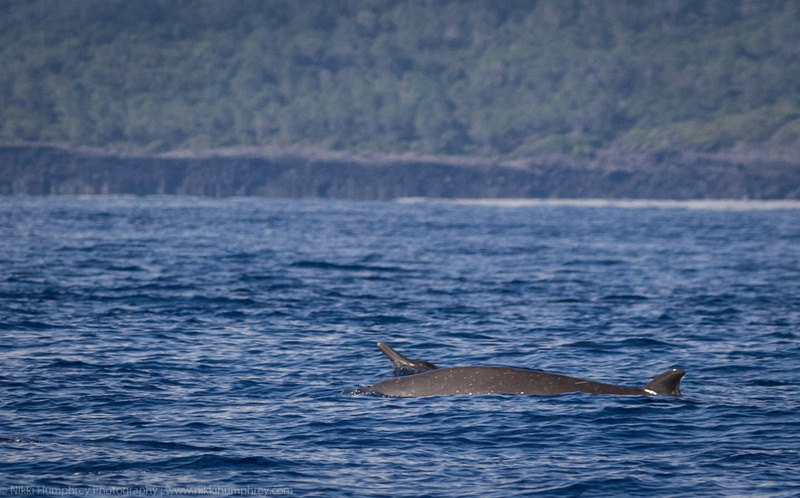 Next up I thought I would share with you some of the images I took of the Short Beaked Common Dolphins. They are a resident species in the Azores so you can see them pretty much year round. They prefer the warmer temperate waters and rarely venture to the polar regions. They are very sociable animals, living in large groups that can become super pods of hundreds or thousands of them. They have been found bow-riding boats and even baleen whales and sometimes interact with Pilot whales and other dolphin species. They have a beautiful hourglass pattern on their sides that varies in shades of grey, yellow and gold while their backs are dark and their bellies are light. 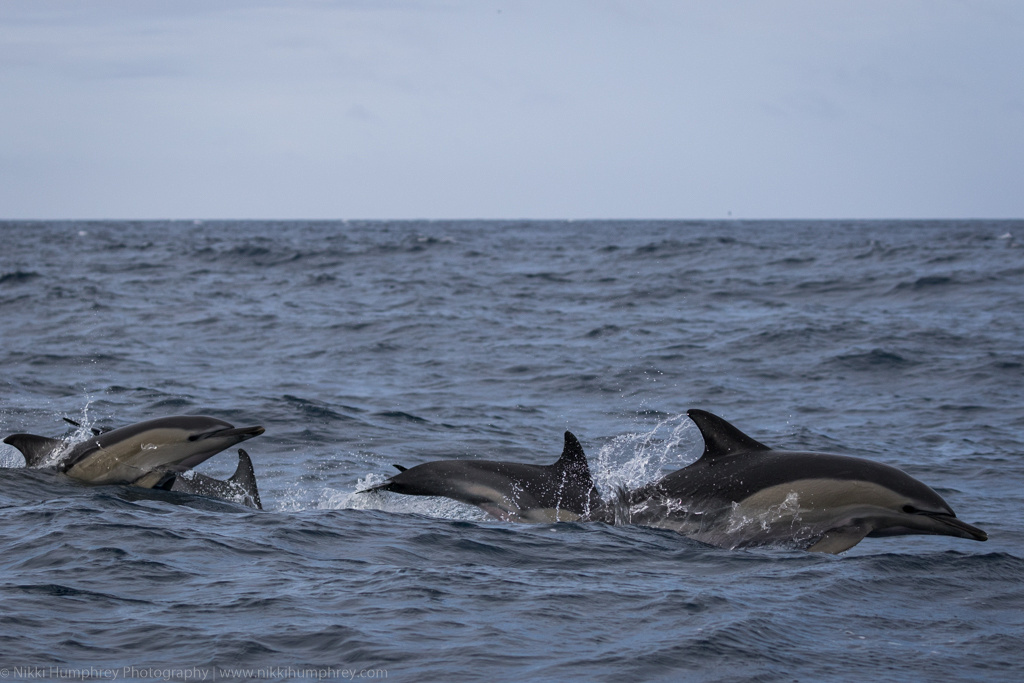 They are nimble, playful and curious dolphins from my own observations and I love to see them jump, porpoise and play in the water. 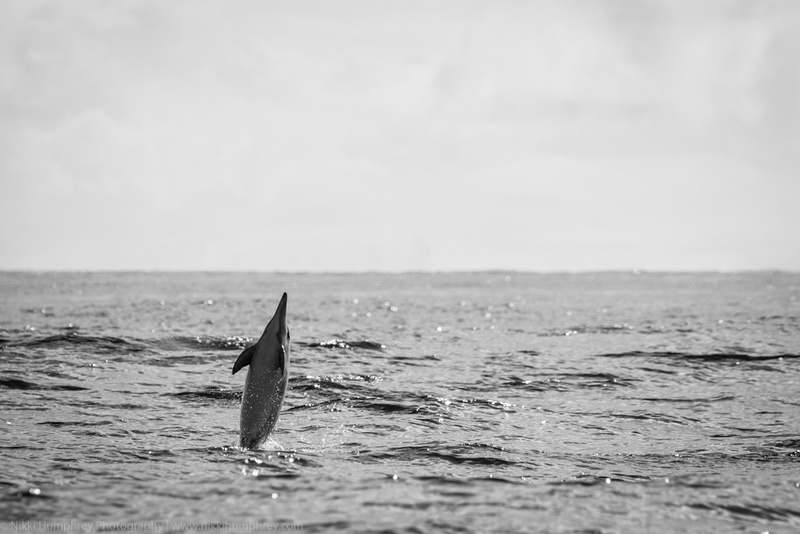 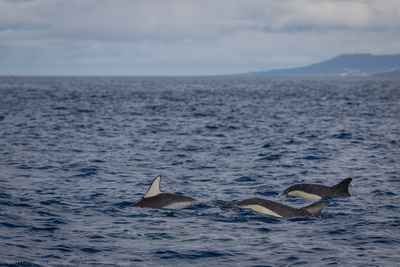 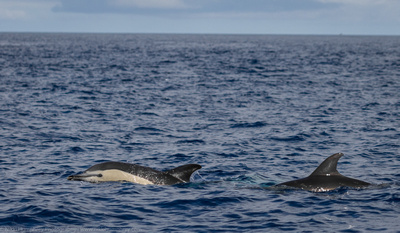 The one on the left shows the variations in colour and hue from individual to individual.

Part Two will be along soon... with more information, more photos and hopefully still interesting.