Towards the beginning of the year I put together and shared a series of black and white photographs of big cats. 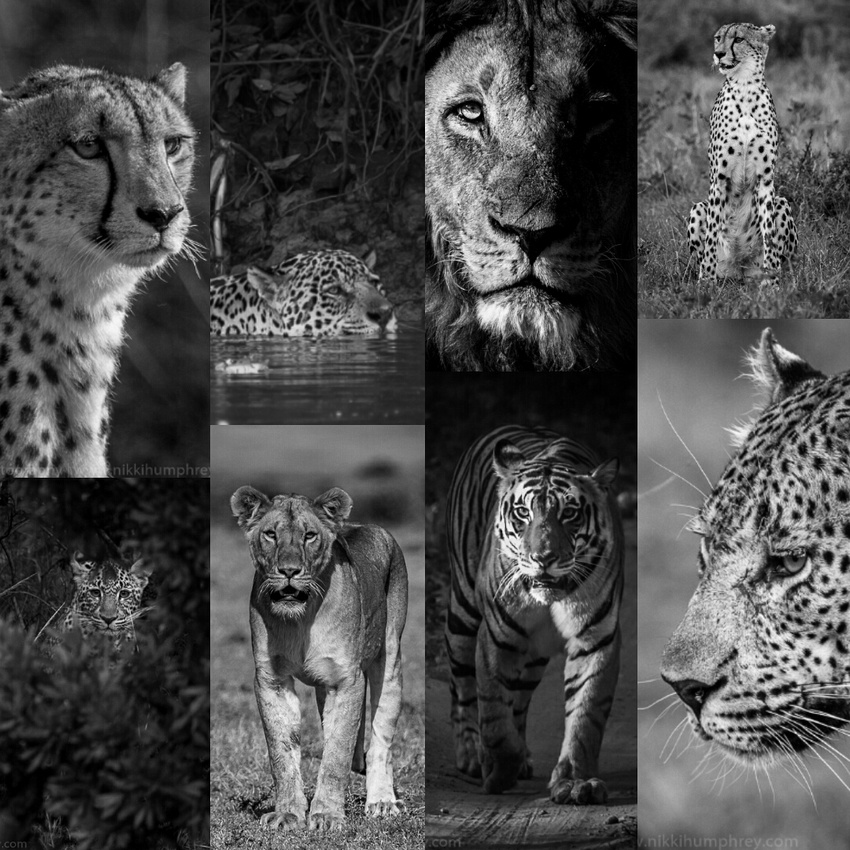 These are some of my best and most favourite Cat encounters so I thought I could talk you through them, where they were taken and why I love them. 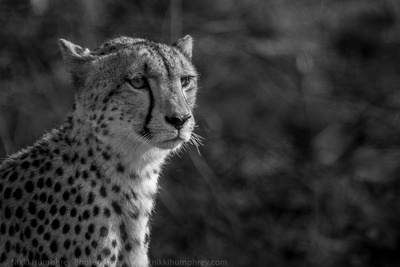 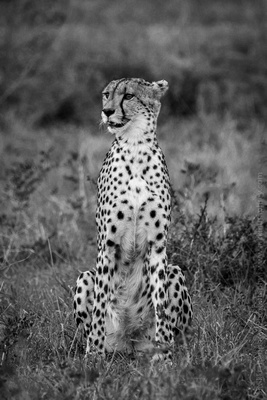 I stayed in Sabi Sands, which is adjacent to Kruger National Park in South Africa, and on a drive one morning we found this beautiful female Cheetah. She sat on the ground and groomed herself before standing up (above left) and starting to walk into the bushveld, we followed for a while but we lost her when she took off after some impala, once she started running, there was no chance we were keeping up with her. We found her on the other side of some dense shrubs and she had caught an impala fawn, she sat and after catching her breath, she ate her prize keeping a watchful eye out for hyaenas and other predators who could take it from her.

The next day we found her again, she once again sat for a while, snoozing and grooming herself before wandering off, as she did, a side-striped Jackal caught her attention and clearly annoyed her enough to make her chase it. It was intense, I really think she would've done some damage to it if she had caught it, luckily it stayed a step or two ahead of her. (Above right) is a moment between that chase and her sharpening her claws on a small tree. Such a beautiful cat.

Next, the Jaguar, is a big male called Maxim (they name them in order to keep track of which ones they see on a regular basis) in the Pantanal in Brazil. We saw this cat numerous times over several days and he always delivered. We watched him try to hunt a Capybara (I have a crazy amount of love for those giant Guinea pigs so I was kind of pleased he missed) but it would have been amazing to see a proper hunt. He used the rivers as ways to get around the dense jungle and was quite happy to sit on the riverbanks allowing us to get good views of him, if they wanted to get away from the humans on the river they can so easily, one metre into the jungle and they are camouflaged into invisibility. 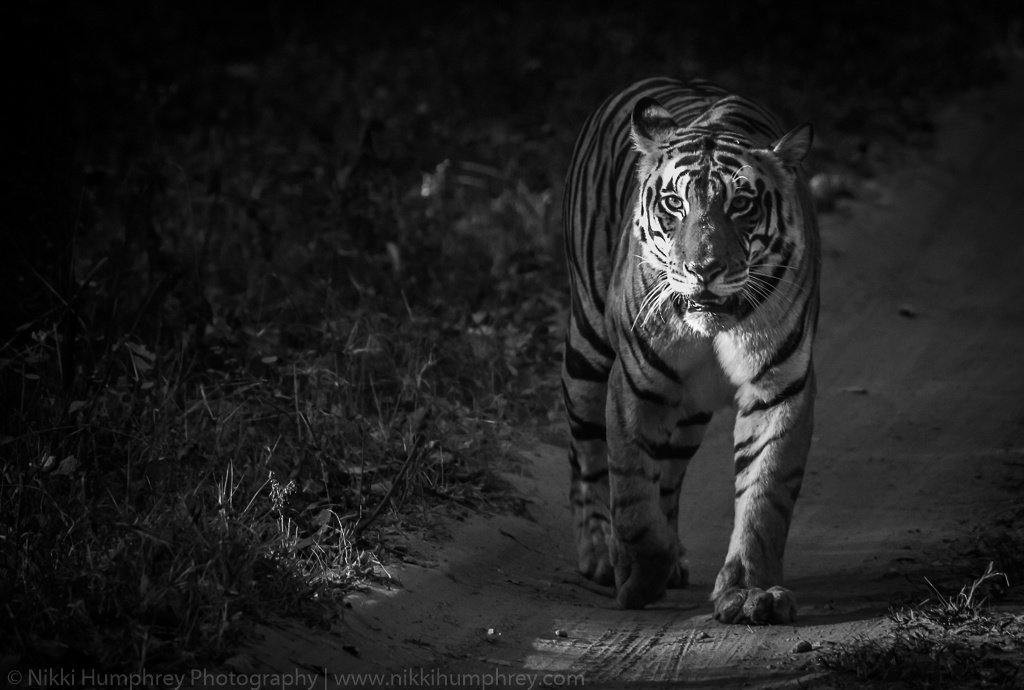 This was taken in Pench National Park, India. We hadn't had great luck at Kanha NP and then in Pench NP and although we'd seen a Tiger very camouflaged in a bush for a very short view, we hadn't had any amazing sightings. Our last morning we arrived at the gate to the park and almost didn't get to go in, some mix-up, we started to drive around and rounding a corner, we were told a Tiger had just walked across the road and into the forest. Once more we had missed out on seeing one. We decided to sit still for a few minutes, then from the jungle out walked this beautiful female Tiger, her name means 'Little Mother' and I apologise I can't remember what it was in the native tongue. She wandered across the road, rubbed her face on a tree, scent marked the same and then walked down the track towards us. I panicked. I took my shots - with no thought for settings - thank goodness they came out, and then the camera said 'no battery', by this point, my knees were trembling, my breath was caught in my throat and my heart was pounding. As she walked up to our car, she swerved off to the right and into the forest. It was a moment indelibly etched in my memory and I can't wait to see them again. 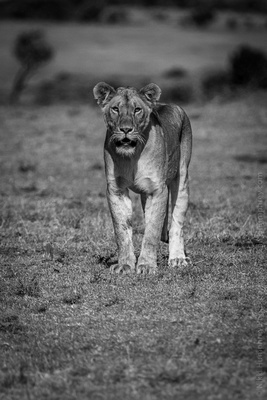 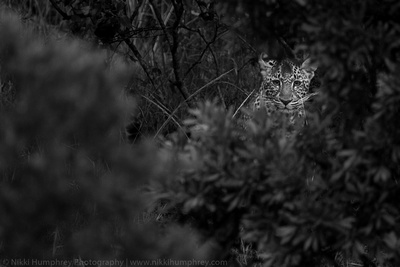 Although these are two different cats they were taken on the same trip to Kenya to the Maasai Mara.

The first is a Lioness who we found on the plains of the Enonkishu Conservancy, we found her just as she had caught a very young Thompson's Gazelle fawn, which she proceded to eat from tail to head. After she finished her snack, she washed her paws and face off a little before walking off across the plains, we got ahead of her and I was able to get a face on, portrait shot of her. I think she looks quite young, we left her sitting on a termite mound before moving off to find something else.

The second is a young Leopard, around 6 months old, at the time this was the youngest cub I had ever seen and it was interesting to watch the difference between the mother who couldn't care less about the presence of the vehicles and the cub who still wasn't sure he liked them. He hid in this thick bush, by finding a 'window' through I could see the potential of this image in black and white in my mind and luckily when I processed it, it turned out how I imagined it, which isn't always how I work so I was pleased to produce what I had envisioned. 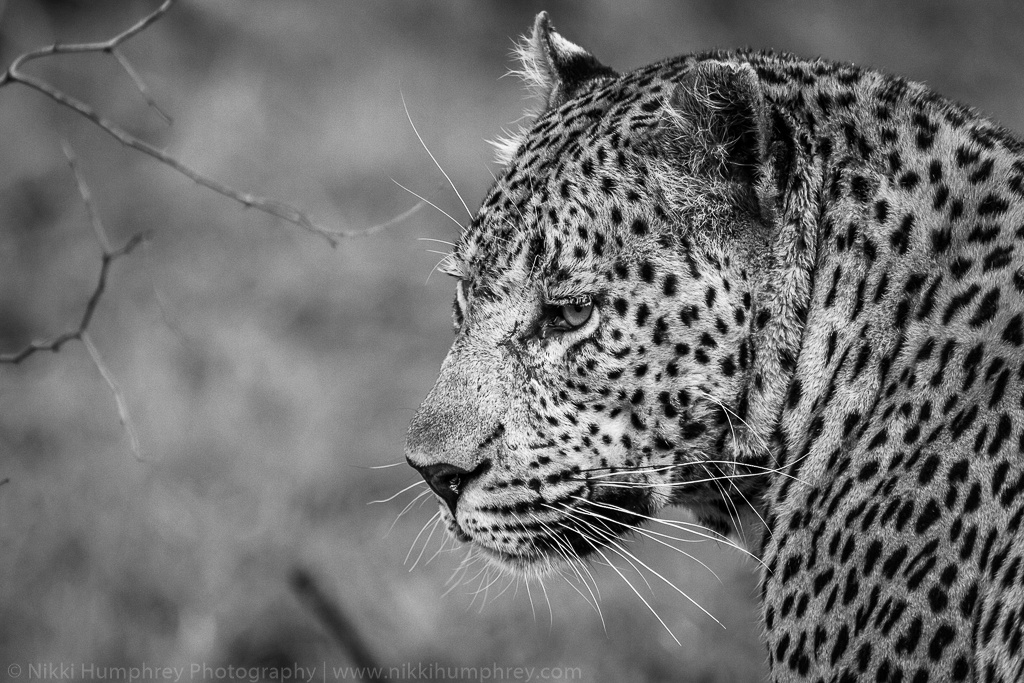 This is one of my favourite cats, his name is Maxabeni and he resides in Sabi Sands in South Africa. Also indelibly etched in my memory is this beast, we spent hours with him, we first came across him sat on top of a termite mound where he dozed for a while. He eventually was tempted down by the prospect of a meal in the form of some Impala walking nearby, when he realised they were too far off he settled down for another snooze, rousing himself a few times to check out new impala arrivals but nothing that made him want to produce any effort. At this point he was lying on the ground next to our vehicle and only a few feet from me, it was an incredible encounter.

This is the last one in the series to share with you and in my mind, the most dramatic. This was a beautiful male Lion taken in Savute in Botswana, one of two males in charge of the Marsh Pride that resides there. We tried to get ahead of them in the hope they would walk towards and we could get some face on shots. Luckily the light was falling from the left side and during processing I realised I could make it even more dramatic by using some editing techniques to darken the right side and keep the left side lit. I originally processed it in colour as well as black and white but for this series it had to be black and white and it worked out beautifully.

I'll leave you with that very image. Thanks for reading and I hope you enjoyed it. 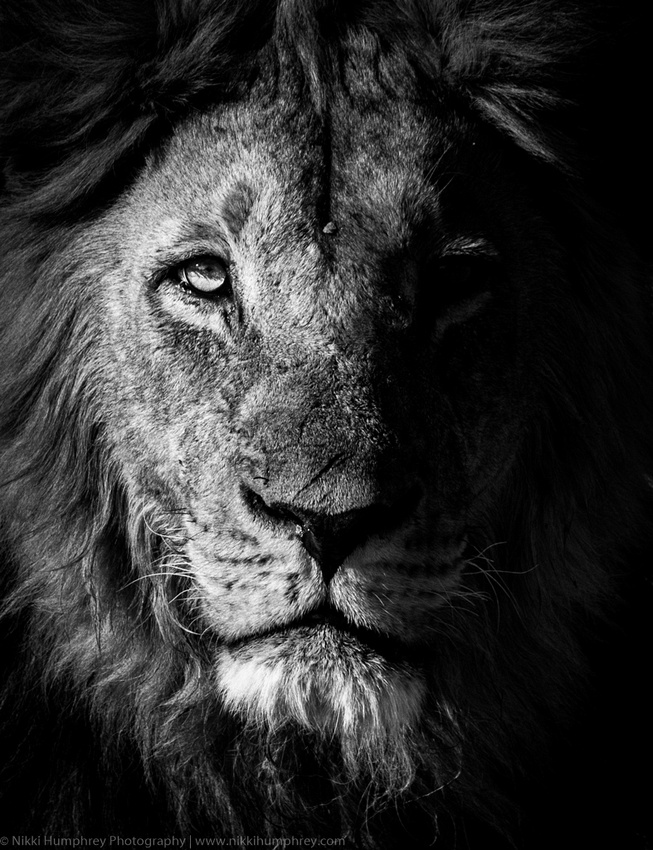 Nikki Humphrey Photography
Thank you for your comments. :D

Pete, some of them do not work in colour in my opinion so I haven't processed them that way but the last one, the male Lion I did process in colour and it can be seen here... https://www.facebook.com/NikkiHumphreyPhoto/photos/a.154490811278818.32351.154460664615166/1187573227970566/?type=3&theater
Jk Mugwe(non-registered)
I have really enjoyed reading the blog and the pictures are stunning. Thank you for sharing Nikki. It was a pleasure meeting and being your safari guide in masai mara. Cheers!
Ty Cook(non-registered)
Spectacular photography, Nikki. Very great to learn the globe spanning story behind them too.
Pete Underhay(non-registered)
As always Nikki, lovely shots. Any chance of seeing them in colour?
No comments posted.
Loading...
Subscribe
RSS
Recent Posts
The Twelve Days of Kruger Leopard Stories Antelopes Tips from the Animals for Social Media Part 2 Tips from the Animals for Social Media Birds of Kruger 7 Birds of Kruger 6 Birds of Kruger 5 Birds of Kruger 4 Birds of Kruger 3
Keywords
nature Nikki Humphrey Photography photography travel wildlife female photographer female wildlife photographer humphrey nikki photographer
Archive
January February March April May June July August September October November December
© Nikki Humphrey Photography
User Agreement
Cancel
Continue